On Monday, two 14-year-old boys caught trying to steal ducks in Guangxi were forced by nearby villagers to kneel by the roadside with dead ducks hanging off their shoulders and suspended from their mouths.

The boys, who also live in the countryside near Yizhou, were known to the duck farmer who carried out the punishment. He said that he wanted to "seize the opportunity to teach them a lesson." Police were never called in.

Last month, a 40-year-old woman was caught stealing in a clothes market in Wenzhou, Zhejiang. The store owner then forced the woman to wear a Cultural Revolution-style placard around her neck reading, "I'm a thief and should be beaten." The woman was also forced to kowtow and paraded through the market with her hands bound behind her back. All the while, shoppers took countless photographs and shared them online. 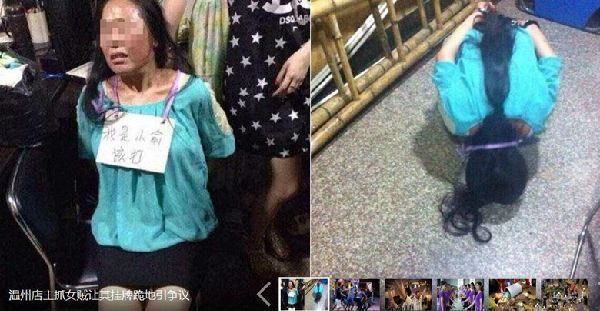 In December last year, an e-bike thief apprehended in Suining, Sichuan was stripped down paraded along the street in the cold of winter until police officers arrived on the scene. Three years ago, a young woman caught shoplifting clothes in Taizhou, Zhejiang had her clothing torn to shreds and and the words "I am a thief" written across her body. After the store owners got bored of beating her, they called in the police. What's not to like about bull fighting? Oh right, everything. PHOTOS: Girl jumps to to her death from Guangxi bridge as onlookers take pictures

Part of the Taoyuan Land Art Festival, the rabbit is also well-timed to coincide with Mid-Autumn Festival celebrations