Taobao’s prices started at a bargain US$100,000, a snip compared to British billionaire Richard Branson's Virgin Galactic, which are on offer for US$250,000.

Not that it even applies to would-be Middle Kingdom taikonauts - Branson hurt the feelings of the Chinese people earlier this year by banning Chinese nationals from its flights due to Cold War spying laws.

That may go part of the way to explaining why more than 300 buyers registered for the inter-galactic adventure when it was launched last Thursday with Dutch space firm Space Expedition Corp (SXC).

The basic experience, Pioneer Astronaut, which includes a return flight from China to the SXC spaceport in Mojave, California, rockets you 61 kilometers straight up, lasts about an hour and costs RMB599,999 yuan (US$96,600).

The premium package, Founder Astronaut, costs a bit more - RMB1.39 million (US$224,000) takes you further than 100 kilometers into the vacuum.

The six to seven minute trip is in the two-seat, reusable, liquid rocket-powered spaceship Lynx, complete with weightlessness. The spaceship, which is said to take off and land vertically, is currently being developed by XCOR Aerospace. 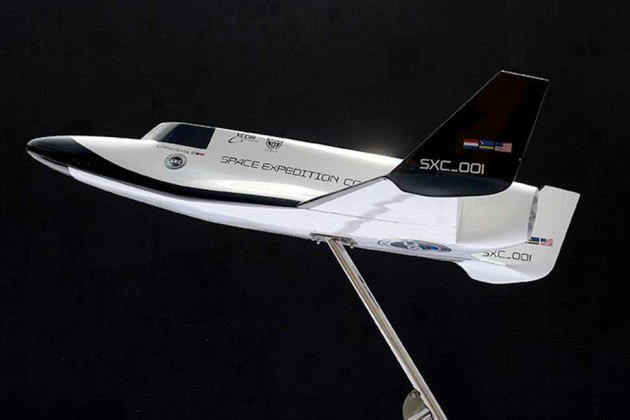 [A model spacecraft of the company Space Expedition Corp (SXC)]