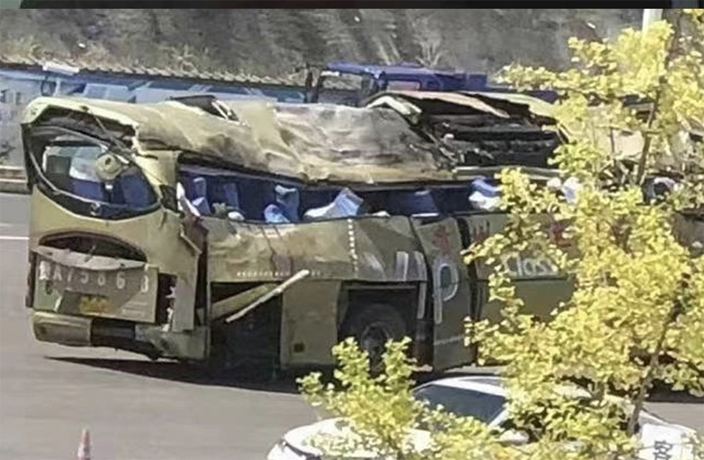 On Sunday, September 18, at 2.40am a bus transporting residents to a COVID-19 quarantine facility in Guiyang, Guizhou province overturned, killing 27 people onboard and injuring 20.

The incident sparked anger among those critical of China's “zero-COVID” policy, which seeks to eliminate the spread of the virus, rather than living with it.

People were even more outraged when they discovered that the passenger bus had broken Chinese regulations that state such vehicles are not allowed to operate between 2-5am.

This year, only two people have died from COVID-19 in the province of Guizhou.

A woman claiming to be the daughter of one victim said:

"My mom stayed at home for half a month. She didn't go anywhere apart from going out for PCR tests... but she suddenly got taken to quarantine and died," as quoted in the BBC.

"There were over 40 people on the bus, all said to be negative with a green code and only secondary contact of asymptomatic infected people.

"They didn’t get sick, and they can't infect anyone… Twenty-seven lives! It is possible that more than 20 families are finished… Guiyang leadership you have to take responsibility for this!

"Can anyone tell us how many people have died this year not because of complications but because of the virus itself? If such data is released one day and it does not cause large-scale deaths, who will bear the responsibility for the overly cautious epidemic prevention over the past two years?"

One Weibo user commented on reports that the driver was wearing a hazmat suit that impeded their vision:

"The driver's hazmat suit and the restricted field of vision is extremely dangerous when driving. If ordinary people dressed like that while driving, they would be stopped by traffic police and lectured.

A picture of the driver wearing a full hazmat suit. Image via Twitter

Several posts on Weibo, China’s Twitter-like platform, have been censored to remove comments criticizing China’s “zero-COVID” policy or those that implemented the measures causing the loss of 27 lives.

On the day of the bus crash, Guizhou reported 712 cases of COVID-19 across the province.

Later that day hashtags relating to the incident had over 480 million views and 86,000 posts, many stating the cause of the accident was China's "zero-COVID" policy.