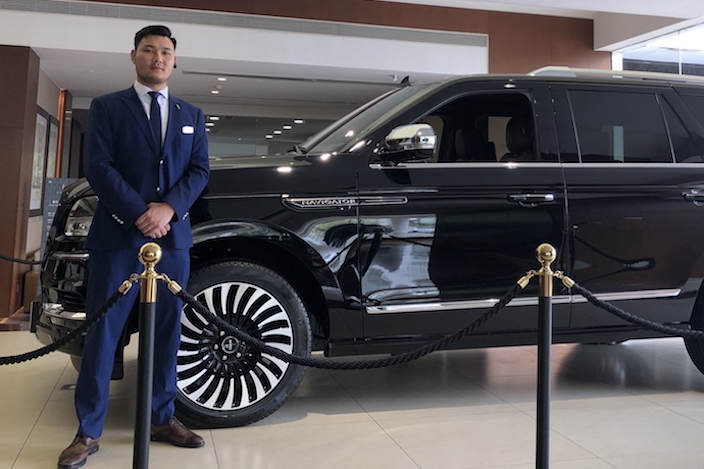 The State Taxation Administration and the Ministry of Finance announced new measures to stimulate China’s sputtering automobile industry. The statement, made on May 31, announced that purchase taxes would be slashed in half on vehicles under RMB300,000 and with an engine displacement of no more than two liters.

The incentive program came into effect on June 1 and runs through the final day of 2022.

Aaron Lu, who has worked with BMW, Porsche and Lincoln since 2017, sheds some light on the current state of car sales in the world's most populous nation. He tells That’s, “The automobile industry accounts for about 10% of China's GDP, and automobiles with less than RMB300,000 occupy the largest market share.” 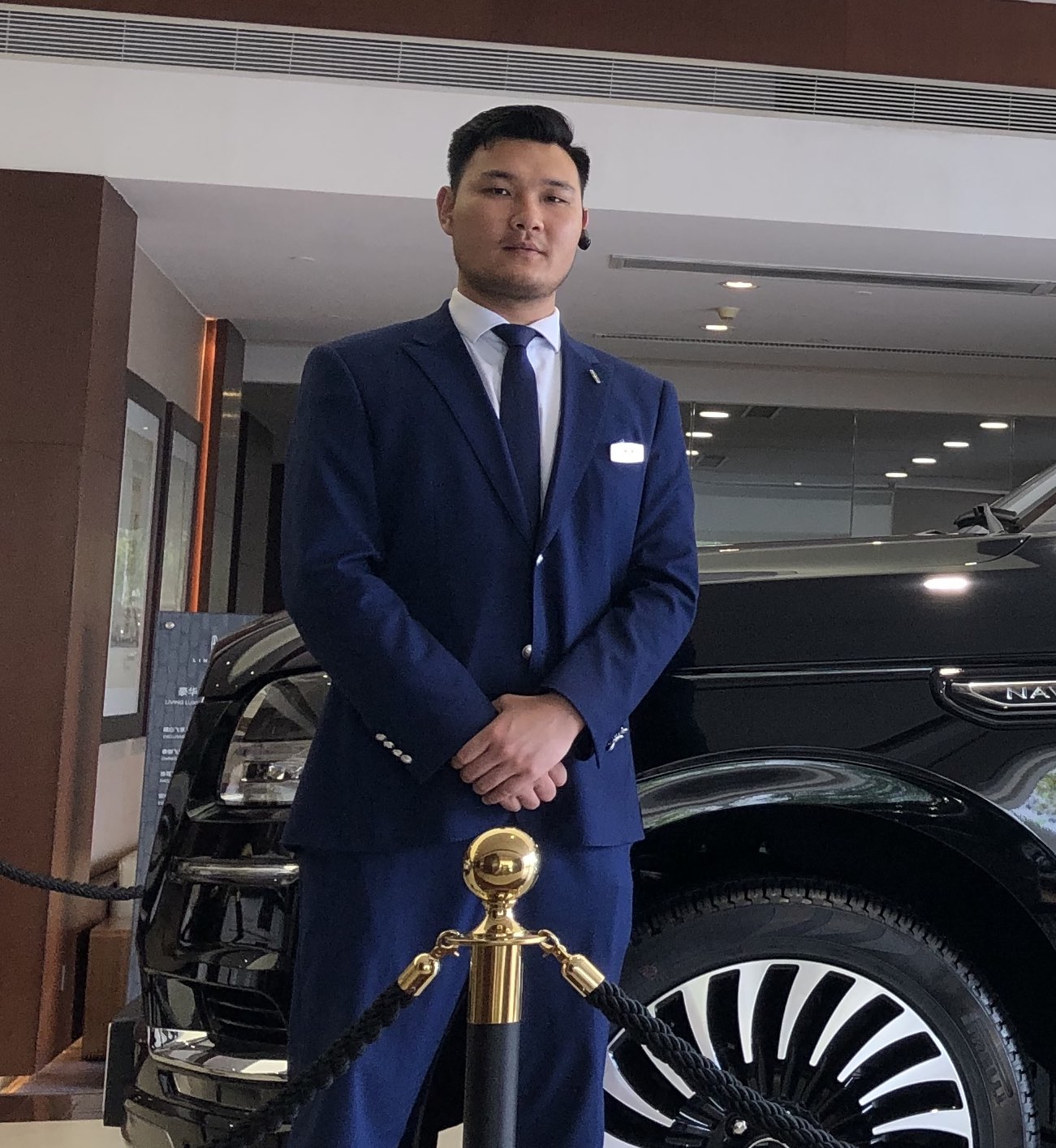 Aaron Lu has worked in the automobile industry for more than five years. Image via That's

Lu points out that this is not the first time this strategy has been employed to correct slumping car sales.

“Reducing vehicle purchase tax has always been one of the important means to promote consumption and boost the market. From 2009 to 2010 and 2016 to 2017, China implemented two rounds of vehicle purchase tax reduction and exemption policies, which effectively promoted the growth of the market by stimulating automobile market consumption, alleviating to some extent the adverse impact of the 2008 financial crisis and the 2015 domestic economic downturn on the market respectively.”

Acknowledging the impact of the pandemic on China’s overall economy, Lu demonstrates that the first two years of it saw resilient car sales. Quoting internal notices circulated through dealerships, Lu continues, “According to the China Association of Automobile Manufacturers, the cumulative sales volume of China's car market in 2020 was 25.311 million vehicles, passenger cars accounted for 20.178 million and were down just 6% year-on-year. In 2021, the domestic sales volume was 26.275 million units, with a year-on-year growth of 3.8%, ending the three-year decline.”

This hopeful trend was short lived, however, as Lu paints a much darker picture of April 2022.

“Retail passenger car sales were just 1.042 million units, down 35.5% year-on-year and 34% month-on-month, both reaching record lows in April. Production also plummeted, with only 969,000 cars produced nationwide, down 46.8% from the previous month.” 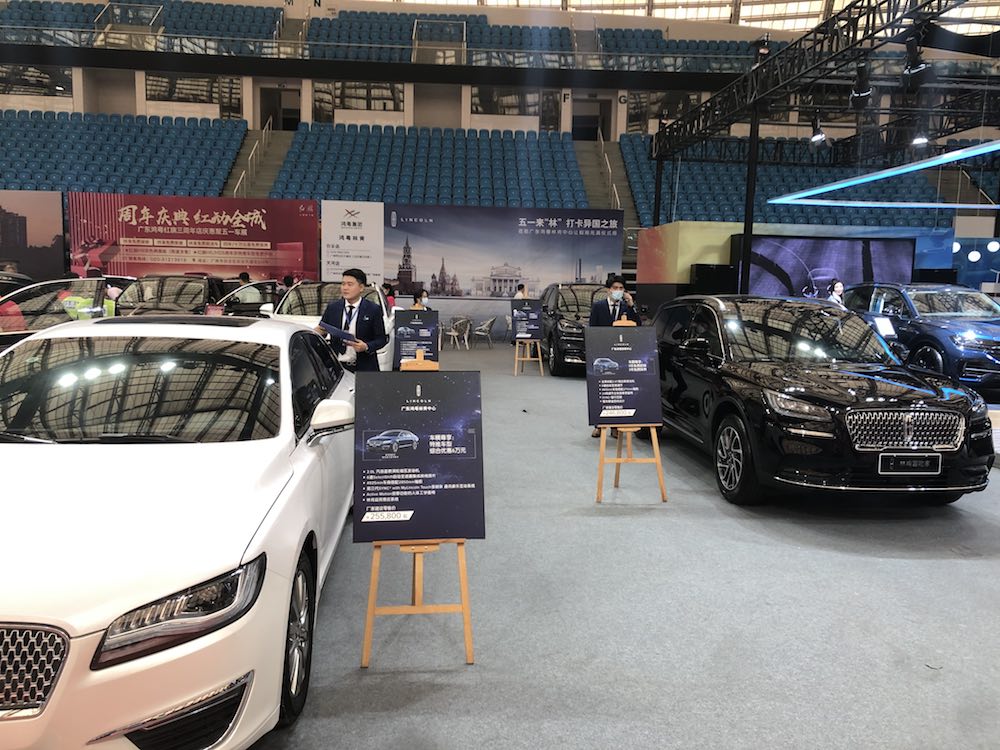 Car sales plummeted in the first two quarters of 2022. Image via Aaron Lu

It becomes blatantly obvious that numbers like these would trigger a response from market authorities. Lu says that numbers for the third quarter haven't been released but the situation remains bleak as we enter the autumn months. He adds that, although sales picked up over the summer, most vehicles remain severly discounted and dealerships are feeling the pinch.

We ask Lu to elaborate on how much tax one normally pays on a vehicle and what these incentives actually amount to.

“First of all, passenger cars over RMB1.46 million are subject to an additional luxury tax.” Lu adds, “Tax on vehicles below that amount is calculated by dividing the vehicle invoice price by 11.3. For example, a car with a ticket price of RMB100,000 would pay RMB8849.5 in purchase tax. If that car meets the requirements of the new incentive policy, then the buyer only pays RMB4424.7.”

This would mean that the maximum savings offered through this policy would be RMB13,274. Nonetheless, Lu says that Chinese consumers aren’t interested in gas cards, free add-on features or other “outdated tricks” when car shopping. “Chinese consumers prefer cash discounts and there is not much dealers can do other than squeeze their own profits. The actual price of cars has dropped a lot in this depressed environment.”

While inflation, shipping delays and vehicle shortages have caused prices to rise in North America, now might be the optimal time to purchase a vehicle in the Middle Kingdom.

We ask Lu what RMB300,000 can buy in the current automobile market. He tells us that there are models from traditional luxury brands like Mercedes- Benz, Audi and BMW in this price range.

Almost all the Chinese car companies, like Hongqi, BYD and Great Wall, are available within this price range. As for pure electric, there are about 30 models from 10 different manufacturers available for RMB300,000 or less.

“Even a Tesla Model 3 can be purchased for RMB279,900 and China’s own popular electric car brands, like Xiaopeng and Huawei's AITO, have models priced under 300,000 yuan. But pure electric cars are not subject to purchase tax in mainland China.”

This revelation leads us to ask about how electric vehicles are faring in the current slump. We know that, in Guangzhou, new license plates are given out through a lottery to reduce the number of polluting vehicles on the road. Electric vehicles get their plates right away.

Fully electric passenger vehicle sales rose 10.9% in 2020 and, according to CNBC, the Hongguang Mini was the best seller. The collaboration between General Motors, state-owned SAIC Motor and tiny-truck maker Wuling produced a compact two-door budget electric vehicle and sold almost 400,000 units, starting at only RMB28,000, in that year. 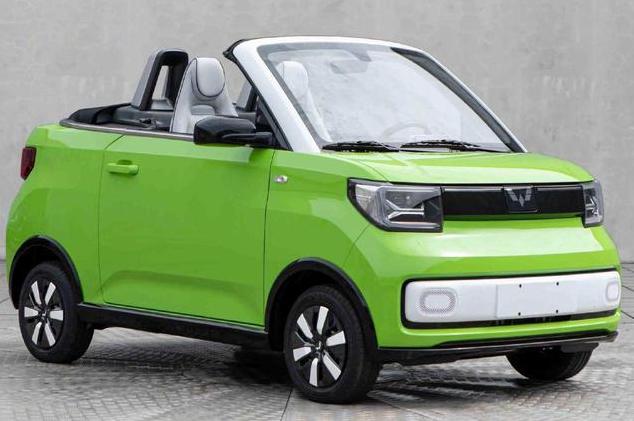 A green convertible Hongguang Mini looking like a snack. Image via @车迷杂志／Weibo

In spite of ongoing preferential policies and surging popularity, electric cars have not been spared in this spring’s downturn.

“Data showed that retail sales of new energy passenger vehicles were only 282,000 units,” says Lu, “down 36.5% month-on-month. Tesla, the overall leader in NEVs, also suffered an unprecedented slump, selling only 1,512 new cars in April, down 97.6 percent from the previous month.”

However, before we can go about test driving an entry-level Benz or an avocado green Hongguang Mini, we are going to need a driver’s license.

Jenny Lee is a consultant with Horizon, a Guangzhou company that specializes in helping foreigners open businesses and acquire special permits and licences, one of which being a driver’s license.

We sat down with her in their office overlooking the Pearl River from the Haizhu Square financial street. 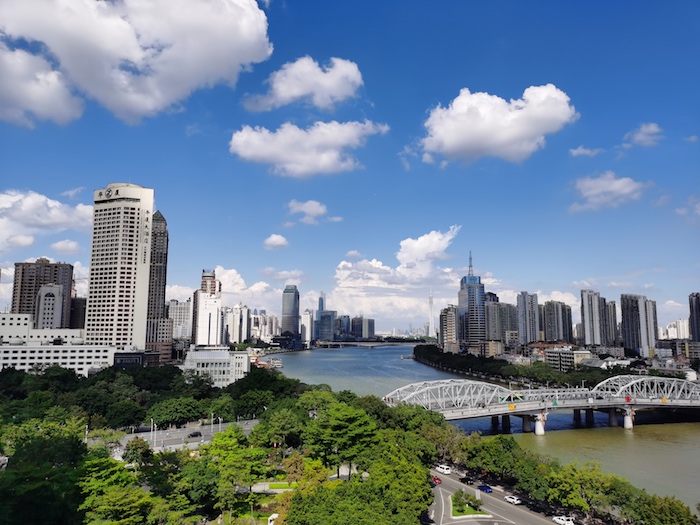 The view from the shared office space where Horizon meets its clients. Image via That's

Without a prior license, the process for foreigners is the same as it is for Chinese residents. However, Lee’s firm doesn’t offer this service as there are no driving schools (that they are aware of in Guangzhou, at least) which can offer driving lessons and road tests in any language other than Chinese.

The process for a Chinese national with no prior driving experience requires two computer-based tests and two practical road tests, in addition to lessons, which costs between RMB3,000-6,000. 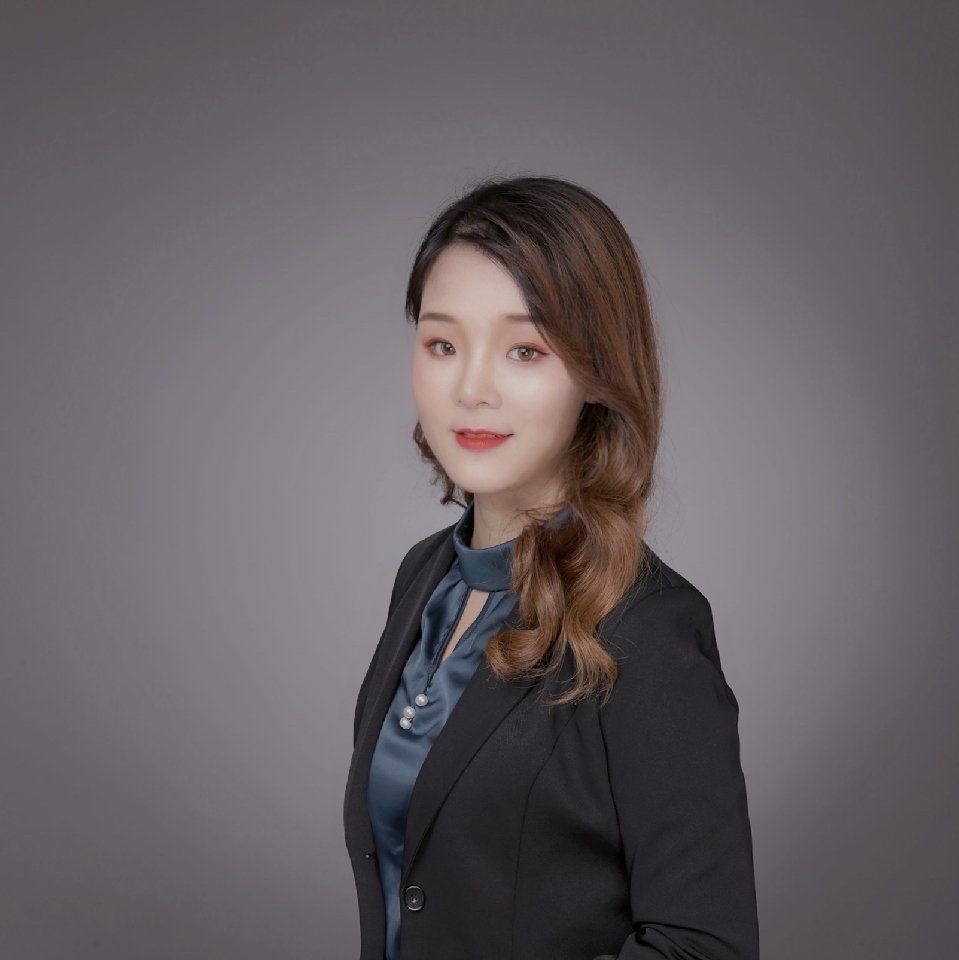 Lee also mentions that you will need to provide a Chinese name for the license so get a friend to transliterate one if you haven't already chosen a meaningful moniker.

We asked Lee if she considers the test difficult, to which she chuckles and responds, “it depends. The test consists of 100 questions and must be completed in 40 minutes. We’ve helped clients from America, India, Jordan and many different countries get licenses.

A recent client from Jordan only spent one week reviewing the study materials. All still while working so he only studied a little bit before bed, and he passed the test with 91 points. If you make time to study the materials well then there is no reason you shouldn’t pass the test.”

“Our service costs RMB1,500 which includes the study materials (in the testing language), booking the test and official notarized translation of all the required documents. The price also includes a service fee as Horizon makes all the appointments and accompanies the client to take the test. The client can then focus on studying the materials to prepare for the test. The study materials we provide are purchased from the Guangzhou government. Some materials are available for free online but these are not always up-to-date and therefore sometimes inaccurate. The test and study materials are offered in a handful of languages like Spanish, Japanese, Korean, English, French but some languages, like Arabic, are not available.”

Beyond the meaning of certain traffic signs and the fundamental rules of the road, the test also focuses on Chinese law and how many points are deducted for specific driving offences. With China dominating the lists of countries with the most surveillance cameras per inhabitants and per square kilometer, we have to inquire about how driving infractions are monitored and dealt with.

Like many countries, China uses a demerit system, with more egregious traffic violations resulting in more points being deducted. Lee tells us that, “you have 12 points per year. If you lose all your points within the year then you need to take the exam again. As soon as you pass the exam again you can resume driving with a refreshed twelve points. However, each deduction comes with a fine, usually around RMB200 but sometimes more. Even parking your car in the wrong place can result in a loss of points.”

Lee tells us that nearly all traffic violations will be handled first by sending a message to your phone. Once the owner of the vehicle has been informed of a traffic violation, someone must report to a government office and show their license to close the record of the offence. If it was someone other than the owner of the vehicle driving then that person can produce their licence and pay the fine and their points will be deducted instead.

Lee laughs and asks if we’ve heard of people selling their demerit points. “It’s very common,” she says. “People who have bad driving habits and can’t afford to lose more points will pay a family member, friend or acquaintance to go and confess to the infraction instead.”

All this talk of bad driving leads us to our next question: insurance.

“Insurance costs for foreigners are the same as Chinese nationals as it’s based on the value of the car.” Lee says that the insurance for a car valued around RMB300,000 is just RMB6,000 per year. Insurance costs don’t automatically increase due to traffic violations or deducted demerit points.

However, if a driver repeatedly seeks reimbursement for repair costs resulting from accidents they cause, they can expect to pay higher insurance rates. If a driver can afford to repair both vehicles out of pocket then their insurance rates will not be higher the following year.

When asked about her own opinions on driving a car in China, Lee says that it can be challenging in big cities with lots of lights and traffic. However, Lee just came back from a family road trip to Guilin and she is beaming as she talks about the freedom of quiet country roads and the beautiful views among the karst peaks.

Scan the QR codes below for more information from Aaron Lu (left) and Jenny Lee (right). 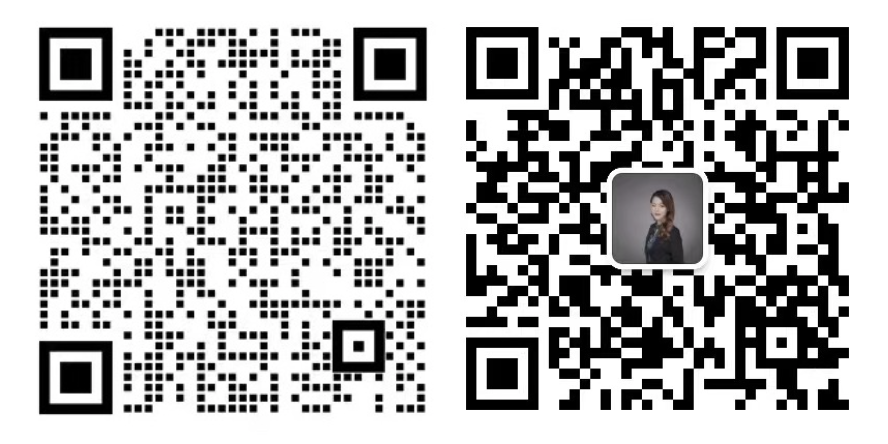