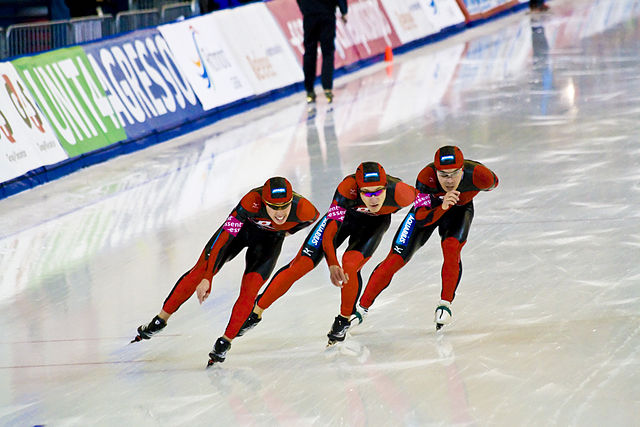 The mass start, which first appeared in the 2018 Winter Games, is the only event where all competitors are on the ice at the same time. First-past-the-post in this race doesn’t guarantee a win; skaters are awarded points for sprints in the 4th, 8th and 12th laps. A final sprint will also award points to the skaters, which can guarantee their spot on the podium.

Competitors aren’t allowed to body check their opponents to the ground, but pushing and pulling is allowed, so don’t be surprised if tempers flare!

However, did you know? Kulizhnikov was found guilty of doping in 2016 and, despite breaking the world record in 2019, failed to qualify for the Games this time around. Hmmm.

Dutch skaters Sven Kramer and Ireen Wust are among the favorites. Kramer has nine Olympic medicals and Wust has 11, making her the most decorated speed skater ever and the county’s most successful Olympian.

Some are even touting that the Netherland’s women’s speed skaters could take the lot. Antoinette de Jong (3,000 meters), Irene Schouten (5,000 meters) and Marijke Groenewoud (mass start) are all current world champions.

Representing Hungary are two speed skating Olympic champions by the names of Shaolin Sandor Liu and Shaoang Liu. They were born to a Chinese father and a Hungarian mother in Budapest. They both represented Hungary in the 2018 Winter Olympics and won gold in the 5,000 meter relay. The pair both trained in China for a prolonged period when they were young, and they come back every year, though likely not during COVID-19.

The Chinese speed skating team had a very successful World Cup, breaking the national record four times. Ning Zhongyan will be one of the team’s skaters to look out for; he claimed two gold medals and two silvers in the 1,000 meter and 1,500 meter races.