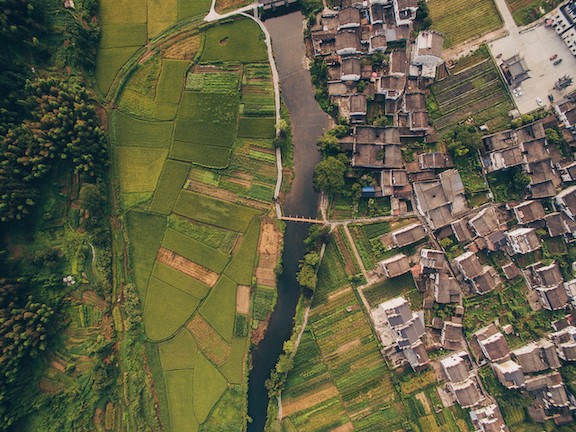 Looking to get out of the city and off the beaten path, yet still within the confines of China’s semi-closed borders? While more common options – like Moganshan, Guilin or Yunnan – are top of mind, there are alternatives that are even easier to reach and explore that arguably offer a more authentic side of China. Wuyuan, in Jiangxi province, is located just 3-4 hours from Shanghai by high-speed train and boasts an impressive array of options for travelers seeking any combination of relaxation, nature, culture, art and food. 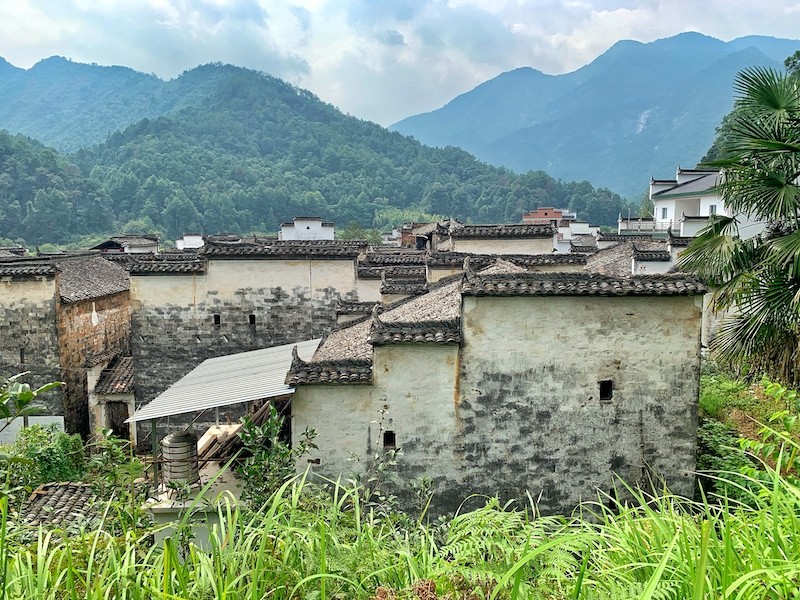 After heavy investment from the government and the construction of a high-speed railway, the lesser known province of Jiangxi has garnered a well-deserved boost in tourism over the last five years. Yet it still remains relatively untouched and retains its rustic, authentic countryside charm.

March and April see the largest influx of tourists for the sea of yellow rapeseed flowers that cover the rolling hills and small villages, but Wuyuan really is a year-round destination, with outdoor activities and distinct natural benefits found in all four seasons. 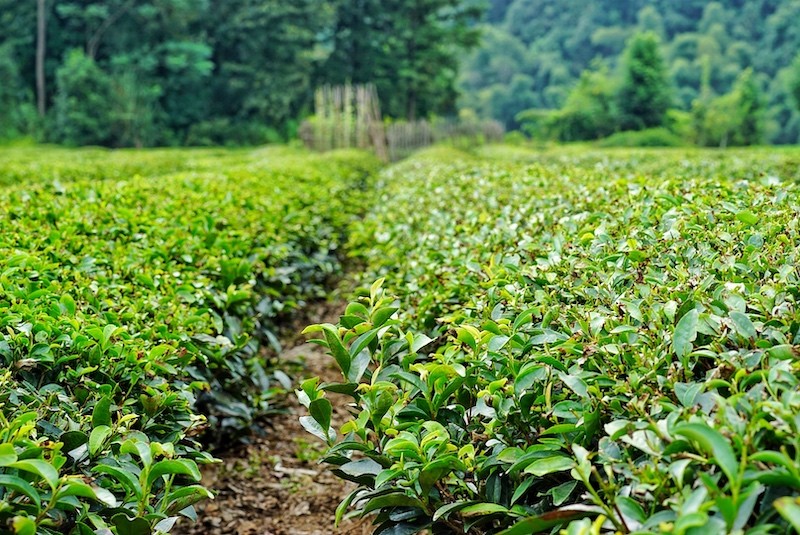 Wuyuan proper – with its high-speed railway station – is mainly a central transportation hub used as a jumping off point for exploring the unlimited small villages that dot the countryside around it. While there is a nice museum, some solid restaurants and a few proper massage parlors, we suggest spending only a day here at most. The villages around Wuyuan and natural sites make for the perfect long weekend getaway, yet with the multitude of options (and the relaxing vibe that encourages guests to slow down and be rather than do), visitors can easily fill an entire week or more. Notable villages range from Sixi Yancun, with its ancient charm and Qing dynasty bridges, to Kengtou, famous for its fresh mijiu, a sweet and well-rounded alternative to the customarily aged rice wine consumed around the country.

For those looking for something more along the beaten path, tourist-friendly options include Huangling – equipped with a cable car over fields and hawker stalls selling everything from ‘traditional’ countryside snacks to jewelry to hand-carved crafts – and Jiangling, nicknamed ‘Heaven on Earth’ because bright yellow blooms cover the rolling hills as far as the eye can see between mid-March to mid-April. 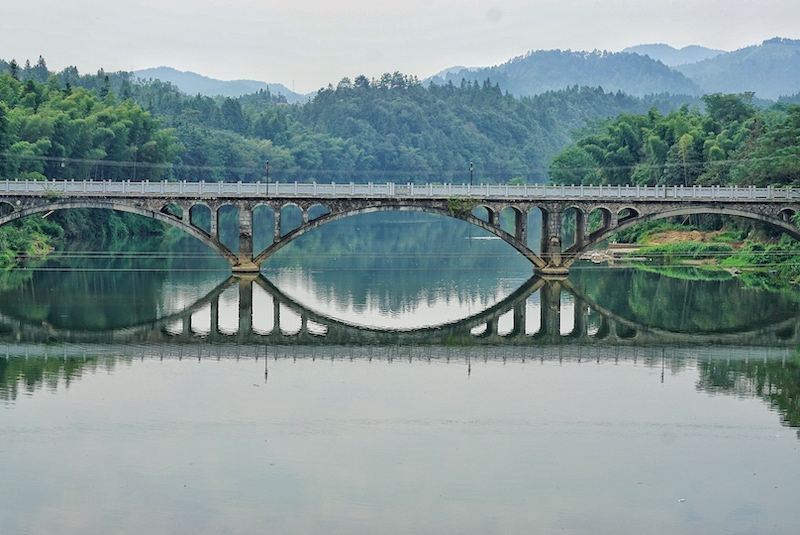 Here are our suggestions for how to spend your time and what to eat for the ideal Wuyuan vacation. 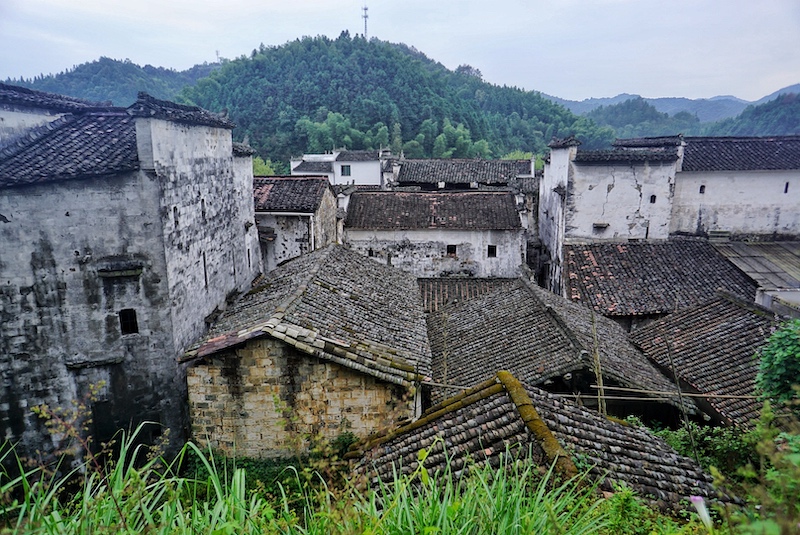 Wuyuan has no shortage of small villages, each with their own unique personality and point of interest. Visiting a handful in a day is quite popular, and a driver for a full day will usually set you back around RMB300.

There are a few popular routes, like the East Line that takes you from Small Likeng, a sleepy village with great sunset views and late night local eats spots that spill out onto the main road, to Wangkou, famous for it’s 1,000+ year old ‘Moon Well’ that’s been used for drinking, washing and its medicinal properties for longer than most civilizations have even been around.

Next hop to Huangling with its expansive cable car ride and then over to Xiaoqi, a village divided in two where the upper section is more geared for tourism and the lower section is secluded and peaceful. 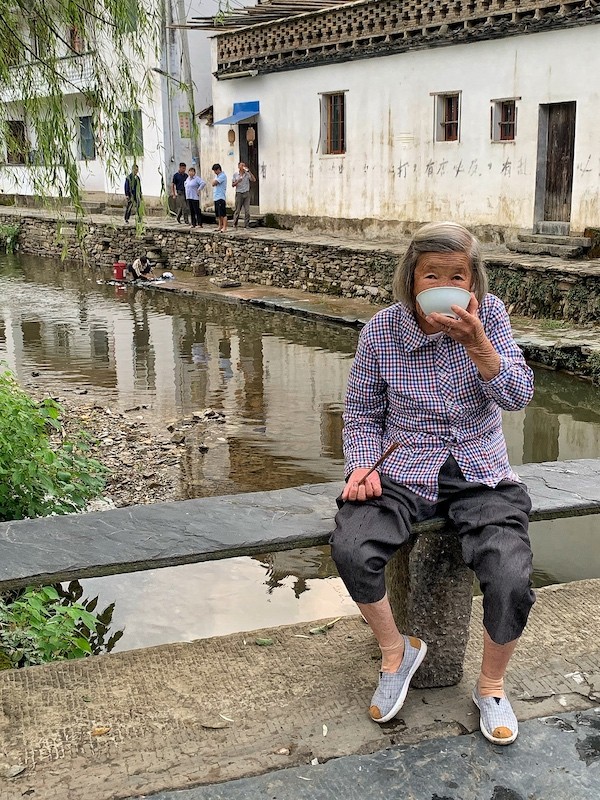 The North Line has a few branch options that take you across other parts of the region based on if you prefer to ride a boat through the cave forest park in Lingya, make a traditional paper umbrella at its birthplace in Jialu, admire the Game of Thrones-esque moat surrounding Jujing or frolic in Changxi’s exquisite autumn foliage. The 4-kilometer loop brings trekkers to 15 unique waterfalls in Xitou. If it is nature sounds you seek rather than squawking photo gawkers, push past the first few falls for the ones near the end of the trail, where you can swim and take in the surroundings in peace.

Grab a bite at Yejia Dayuan (叶家大院), a country-style restaurant where the menu is a refrigerator, and fish are caught to order from the pond that the restaurant is built around. Featuring loads of fresh produce and tofu options, this restaurant is quite vegetarian friendly. 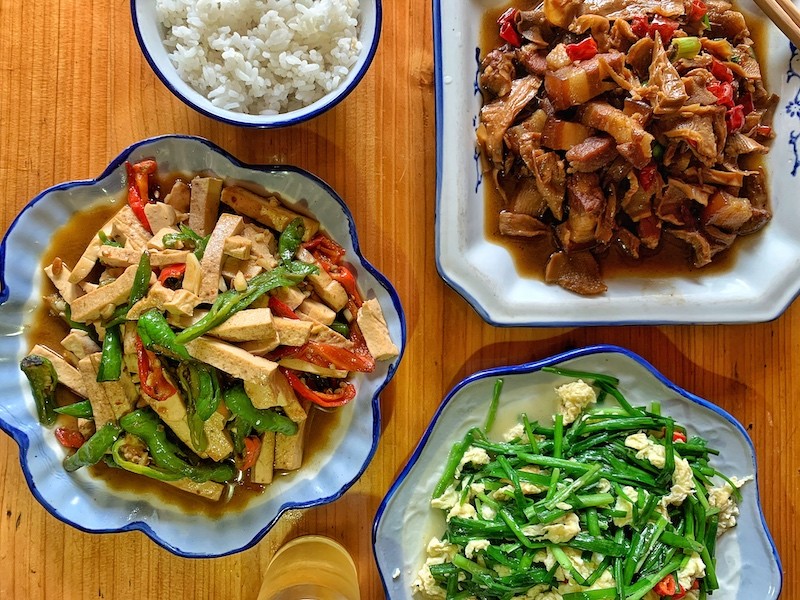 Follow up a visit to the falls by submerging yourself into the slow-paced country life at Jiangangling and neighboring Huangcun villages. Located just 5-10 minutes-drive away, these authentic villages are ideal for an afternoon meander through back alleys to watch people going about their daily lives, fishing, washing clothes and catching the latest village gossip. 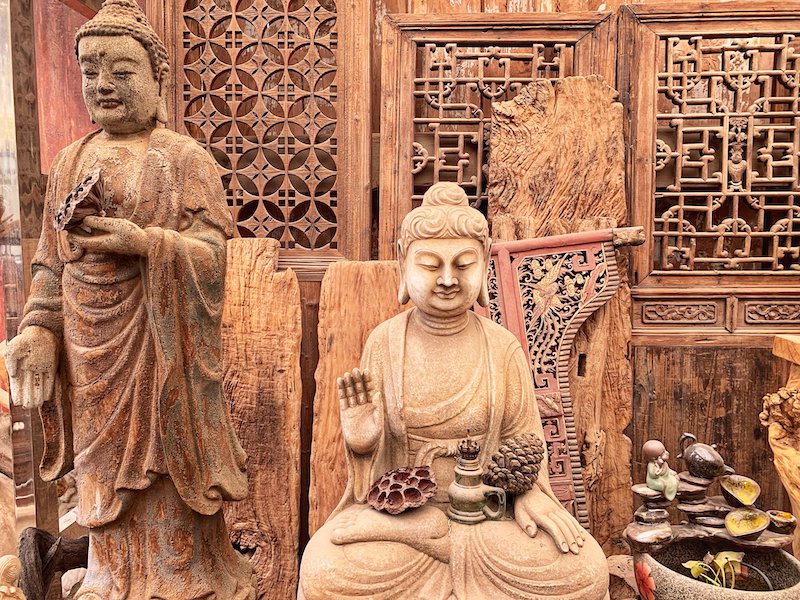 Every Saturday morning in Jingdezhen, a Creative Market is held outside the Sculpture Factory. Young artists display their individually designed and created wares of anything from cups, mugs and plates, to scarves, jewelry, and even artisan liquor. Known as the porcelain capital of the world, ceramics are found everywhere, even molded into patterns on the sidewalk.

Check out the Sculpture Factory Main Street for some extra shopping, and swing by Southern Sloth, a new craft brewery tucked down a narrow alley, with the father and son duo dividing the responsibilities based on their strengths. Kai, the face of the brand, focuses on marketing and design, while his father, a Mao era engineer, is in charge of production. The Tao Xi Chuan District, an industrial factory area, has also been converted into an everyday art district, filled with displays, cafes and shops. Sanqingshan is a sacred Taoist mountain about 40 kilometers from the nearest town, Yushan, where you can take a minibus that runs every 40 minutes to the mountain. The titular san comes from the three peaks that make up the mountain, a UNESCO World Heritage Site that costs RMB120 to enter. Hiking up, around, and down the entire mountain takes roughly 7-10 hours, but most people will choose to take a cable car from the South or East entrance and just hike the top peaks.

Make sure not to miss the Sanqing Gong temple, located near the northern part of the trail. This 1,500-year-old Taoist temple holds a mystical aura that is only amplified by the actual mist. For an alternative to the busy Sanqingshan, Mount Dazhang boasts China’s second largest waterfall, epic limestone cliffs and proper hiking trails with very few tourists.

For the adventure seekers, Wuyuan offers white water rafting at Wulongyuan, albeit tame when compared to the more rugged New Zealand alternative. With manicured slides and minimal physical activity, the 40-minute journey down river is still thrilling nonetheless. Confident swimming ability is advised. The cold bean starch noodles, a popular dish in Jingdezhen, feature unctuous, chewy noodles that soak up all of the flavor of the vinegar, soy and sesame oil dressing. Topped with cilantro, fresh cucumber, crunchy pickled radish, citrusy dried orange peel, and insanely spicy chili sauce, the crazy combination of flavorful components is memorable in more ways than one. We found our favorite version at a small no-name cafe nestled beside an art gallery in Jingdezhen’s Tao Xi Chuan District. 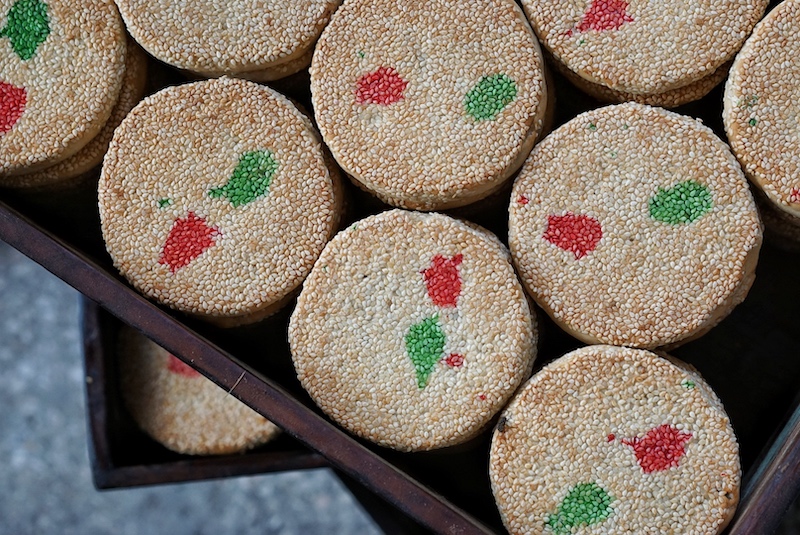 Zheyuan may seem like any of the other 50+ Wuyuan villages, but along the main street sits the most famous moon cake baker and Chinese pastry dessert maker in the entire area. People travel from the city directly to the shopkeeper’s humble store, adorned with a self-made pizza-oven lookalike used for baking bing of all kinds round the clock. 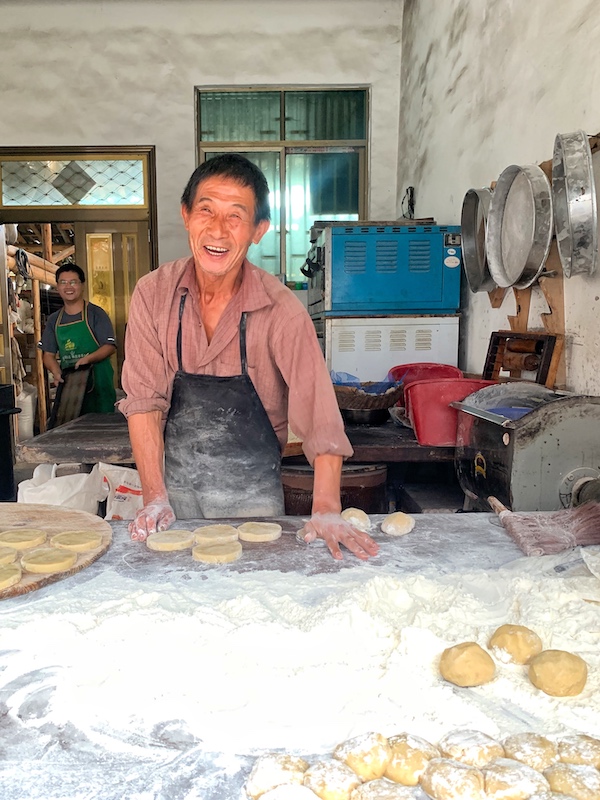 The buttery black sesame and tangerine peel-stuffed bing crumble like a sugar cookie, and thankfully are available year-round, while the more typically-shaped mooncake desserts filled with thick red bean paste or a mix of sweetened nuts and seeds, put all other mooncakes to shame. Jiangxi is known for its steamed yet flavor-packed dishes, and the pork ribs with sticky rice wrapped in a lotus leaf are a taste of pure comfort. Similar to the Cantonese lo mai gai, this dish incorporates simple flavors like ginger, soy sauce and Shaoxing wine, mingled with the earthy flavor imparted by the lotus leaf wrapper, and extra body from rice flour to create that perfect bite. Think fall-off-the-bone meat accompanied by chewy, fat-soaked, flavor-filled rice.

We found our favorite version in Zhangcun, a small village right behind the larger town of Sikou. The restaurant and hotel combo Jialu Nongzhuang is popular amongst all the locals and tourists alike, and for good reason; their rustic food and wide range of specialty dishes are top notch. 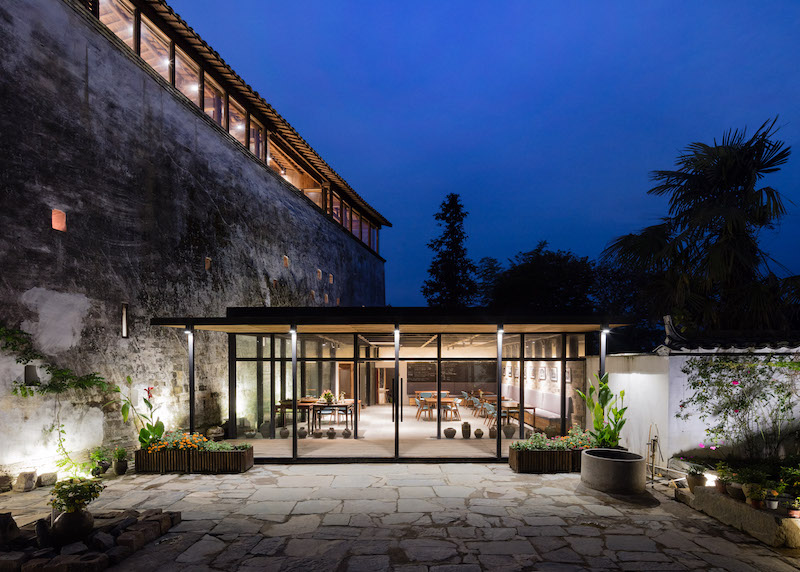 Wuyuan Skywells is a family inn and passion project of England-native Edward Gawne and his Jiangxi-born wife Selina Liao. This 300-year old refurbished mansion from the Qing dynasty is the family’s antidote to the mile-high skyscrapers, always-online, ruthless overtime culture and relentless pace of life in modern China. Read more about Skywells right here.