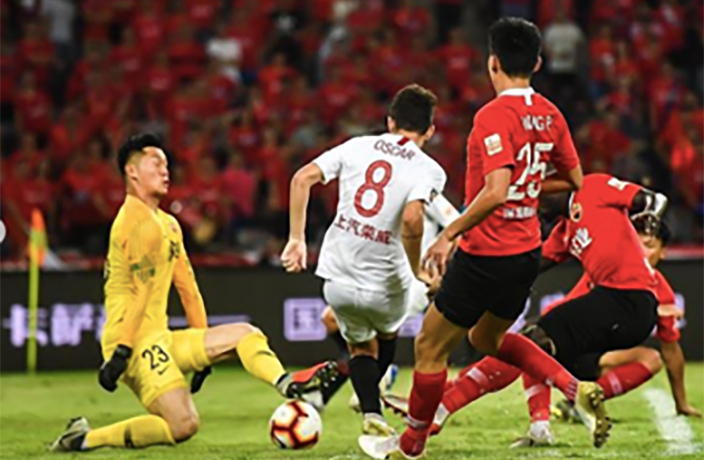 A huge result at the Jinan Olympic Sports Center saw the Chinese Super League title race take a big twist on matchday 15. Leaders Beijing Guo’an fell to a 2-0 defeat at the hands of Shandong Luneng as Shanghai SIPG cut the gap to two points thanks to an Oscar goal in Shenzhen. Guangzhou Evergrande play tonight and will be looking to also cut the gap to two as Shanghai Shenhua welcome Fabio Cannavaro’s side to Hongkou.

Forward Roger Guedes was too hot to handle as his superb brace was enough to see off pace-setters Guo’an. The two goals came in as many minutes for the 22-year-old Brazilian as Roger Schmidt’s Beijing side struggled against a Shandong side who were missing star-men Graziano Pellè and Marouane Fellaini.

Guedes’ first was a beauty, hammering home a low-driven shot from the edge of the box which Zou Dehai couldn’t get anywhere near. If his first goal was all his work, his second certainly was not. Li Xiaopeng’s side launched a blistering counter attack thanks to midfielder Hao Junmin.

Seemingly outnumbered, Junmin managed to wriggle past Beijing’s left side before curling a gorgeous delivery straight into the path of Guedes who fired home on the volley.

Guo’an did have their chances, but poor finishing saw the side succumb to just their second defeat of the season. Hou Yongyong, John Hou Sæter, flicked a dangerous delivery goalward late on which beat Wang Dalie in the Shandong goal, but the crossbar came to the rescue to keep and earn Wang a clean sheet. This came after Spaniard Jonathan Viera saw his vicious 30-yard strike crash off the post after good build up play down the left flank.

Guedes could, and probably should have compiled the misery and claimed his hat trick when he found himself first to a dangerous low cross from the right. With the goal gaping, the Brazilian horribly miscued and scuffed his effort wide of the far post.

After the game, head coach Roger Schmidt put the loss down to a poor showing in the final third, telling club media: “I think we played well today, there were enough opportunities to win the game. We created many opportunities. Football is sometimes like this, if you If you can't score a goal, it's hard to get the desired result.”

The result sees Guo’an’s lead at the top cut to just two points, whilst Shandong stay in fourth.

An acute finish from Oscar five minutes into the second half was enough to move SIPG within two points of league leaders Beijing Guo’an. Despite Hulk missing a first-half penalty, his compatriot stepped up to make sure all three points were going back to Shanghai.

The chance came as Shanggang’s Zhang Wei hooked the ball over his head and Shenzhen’s Wang Peng completely miss judged the flight of the ball, leaving Oscar with the freedom of the penalty area before he calmly slotted the ball through the legs of Guo Wei.

Hulk had earlier slipped in Li Shenlong down the right channel before he was unceremoniously tripped from behind by Cheikh M’Bengue. Li's claims for a foul were initially waved away by referee Zhang Lei, before VAR came to the rescue.The former Zenit and Porto man stepped up to take the resulting spot-kick but saw his penalty comfortably saved by Guo Wei diving to his right side.

The defeat leaves Shenzhen without a win in seven games as they languish a point above the relegation zone. Adversely, SIPG are now seven games unbeaten away from home, as they head into Saturday’s Shanghai Derby with the opportunity to go top of the CSL.

Vítor Pereira was relieved at full time, commenting: “It is necessary to show a strong will to win the game. We are very tired after playing the AFC Champions League, but I am very grateful to the players for their fighting spirit, which helped us finally get three points. These three points are very important for us."

Fernandinho scored one of the goals of the season so far, which was enough to beat Tianjin Teda at the Chongqing Olympic Sports Center. Just after the break, the Brazilian latched onto a loose ball on the half way line and danced past hordes of bodies before rounding Du Jia in the Tianjin net and tapping home.

Despite Yannick Ferreira Carrasco and club Dalian Yifang in a stand-off over a potential move for the winger, the Belgian was back to his best as his penalty helped Dalian to a 3-1 win away at Beijing Renhe.

With Eran Zahavi currently suspended, forward Dia Saba came up with the goods for Guangzhou R&F as his brace was enough to see off Henan Jianye.

Hebei China Fortune fell to a 2-0 home defeat at the hands of Wuhan Zall whilst Jiangsu Suning needed a last-minute equaliser to salvage a point at bottom-placed Tianjin Tianhai as the Nanjing side’s poor run continues.

Guangzhou Evergrande can go level on points with SIPG and cut the gap with Guo’an to two should they beat struggling Shanghai Shenhua tonight at the Hongkou Stadium.