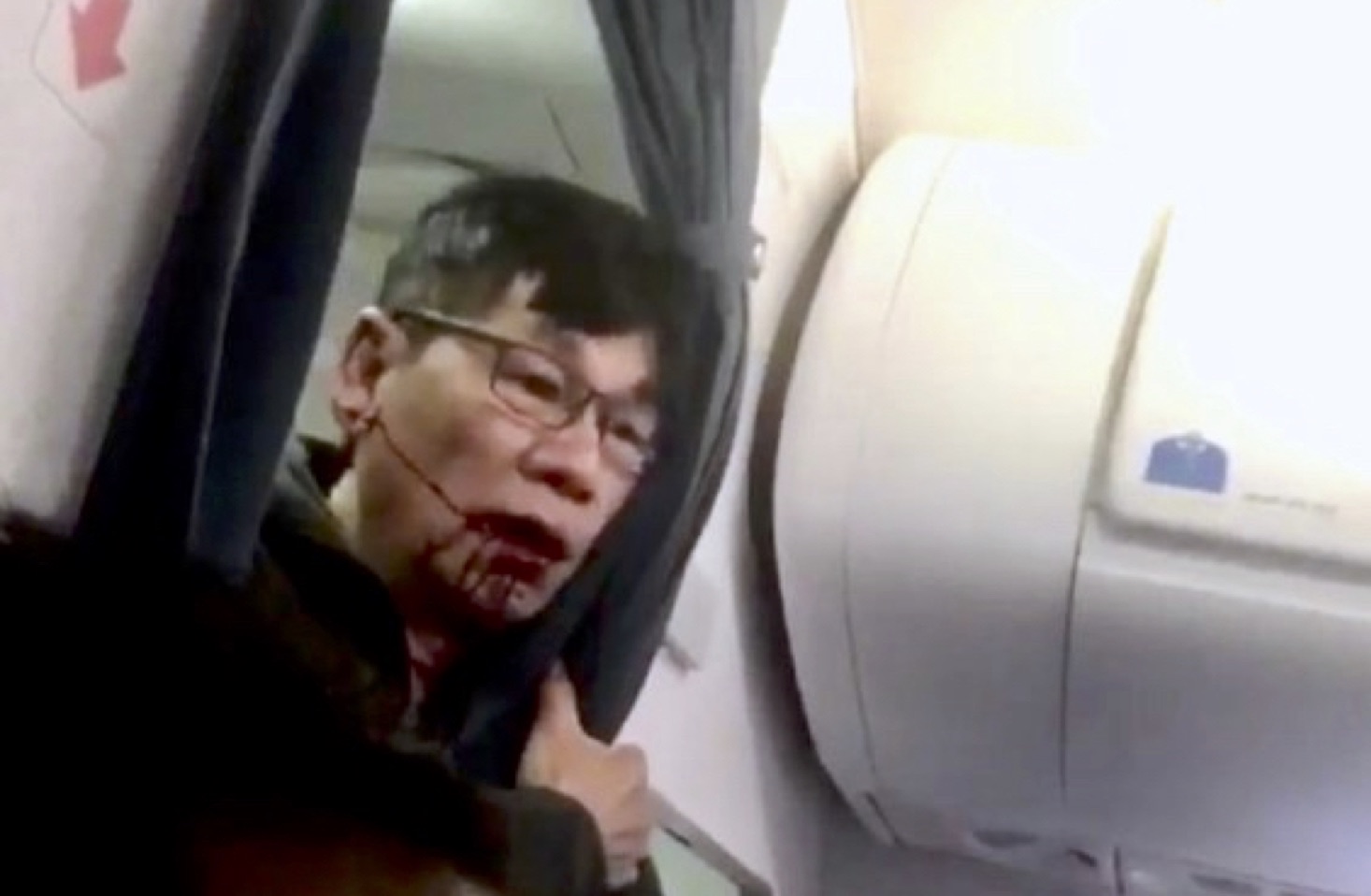 “No person should be treated in this manner, and it is especially notable that this person was Chinese-American," claimed Judy Chu in an interview with Beijing-based Xinhua News roughly 24 hours after the viral video surfaced of a man being dragged off a United Airlines flight.

The man, 69-year-old doctor David Dao, suffered a concussion, broken nose and two missing teeth after officers slammed his head against an armrest.

Though Dao’s nationality has since been confirmed to be Vietnamese, it was the Chinese community, ironically, that first came to his defense, with Judy Chu – the first Chinese-American woman elected to the House of Representatives – demanding accountability from United Airlines and the US Department of Transportation.

On the day the incident went viral, Chinese business and entertainment icons mobilized their fans with social media, calling for a United Airlines boycott.

A-list comedian and talk show host Joe Wong posted an image of Dao’s bleeding face on his Weibo account and claimed the incident warranted a call to action to “recognize discrimination that Chinese Americans suffer.” 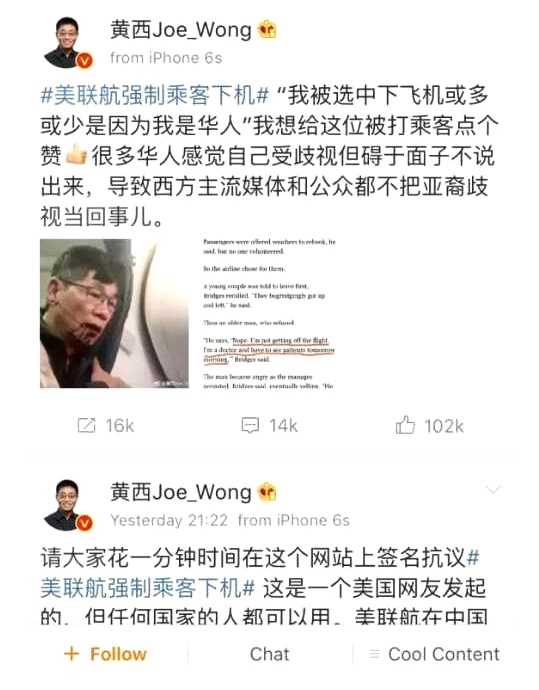 Richard Liu, CEO of JD.com, affirmed his own disdain for the airline by citing the poor service he has experienced first-hand: “UA's service is absolutely the world's worst," he wrote.

Even iconic Chinese musician Gao Xiaosong voiced his concern, saying "From the ground to the air, the arrogance of United Airlines’ service is heinous."

In the 48 hours or so that Dao’s video went viral, dozens of China’s KOLs rallied onscreen in a ‘Boycott United’ campaign, like a torrent of clenched fists behind smartphone screens.

A petition titled ‘ChineseLivesMatters’ quickly circulated on WeChat and called for a federal investigation into the case. Mere days later, it had garnered more than 200,000 signatures – enough, apparently, to “get a response from the White House.” 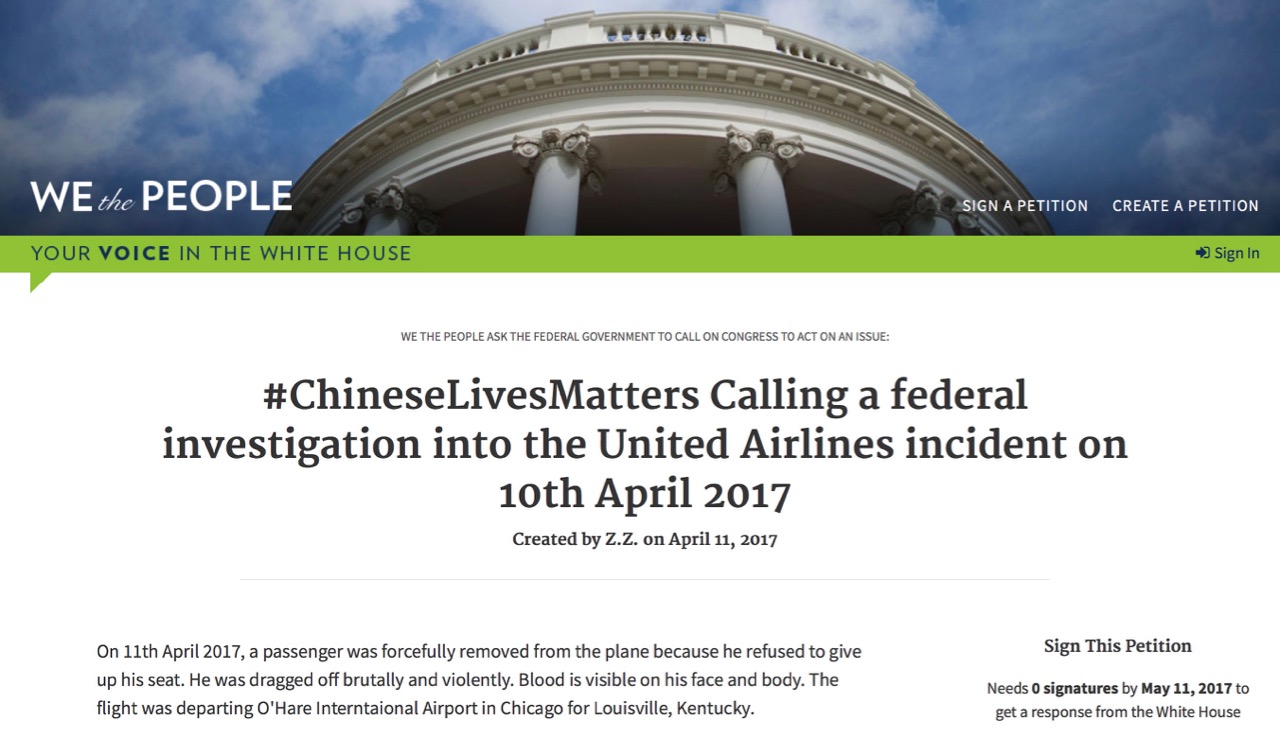 Some even went so far as to dub Dao the new ‘Asian Rosa Parks,’ a title that was later reuttered by Dao’s lawyer at a press conference held at O’Hare Airport (Rosa Parks’ niece Urana McCauley, however, allegedly told TMZ it was an inappropriate comparison, though she expressed her empathy and support for Dao and his family).

Lost in opinionated flash news, the martyred physician soon became the face of a major online campaign in China, and yet everyone had seemingly missed one very important detail: David Dao is Vietnamese-American.

It wasn’t until April 12 that the truth of Dao’s identity finally made its way onto Tencent message boards – about three days after the well-coordinated boycott effort had gained momentum and wounded the pocketbooks of United Airlines shareholders.

The ethnicity of Dr. Dao prompted Chinese Internet users to scratch their heads in unison. On April 13 and 14, Chinese message boards read: ‘David Dao is not Chinese. He’s not one of us.’ 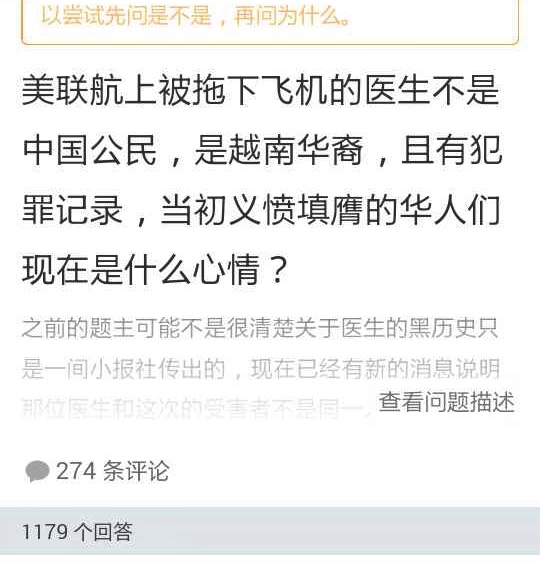 The heated, somewhat impulsive crusade had morphed from a fight against United, to a call for Chinese-American rights, to a Vietnamese-backed protest and even a call for action on behalf of Asian-Americans in general.

Now that they know David Dao is in fact Vietnamese, are Chinese netizens still willing to effect positive change for causes beyond their own?

"I think the sentiment goes like this: if he's not one of 'our' people, then he's not a person," comments one Weibo user. 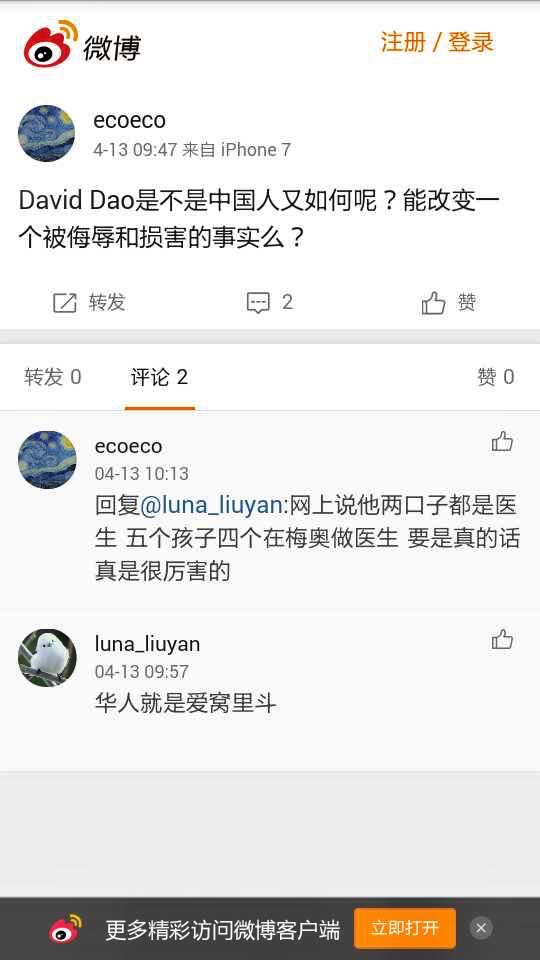 Others take a less nationalistic approach.

“Does it really matter if David Dao is Chinese?" asks one Weibo user. "Would it take away the damage that has been done?"

If China's far-flung online community can rally behind a victim of savage brutality without needing an ethnic bond or national cause, then this could be a watershed moment.

READ MORE: Explainer: Why Flights are Always Delayed in China