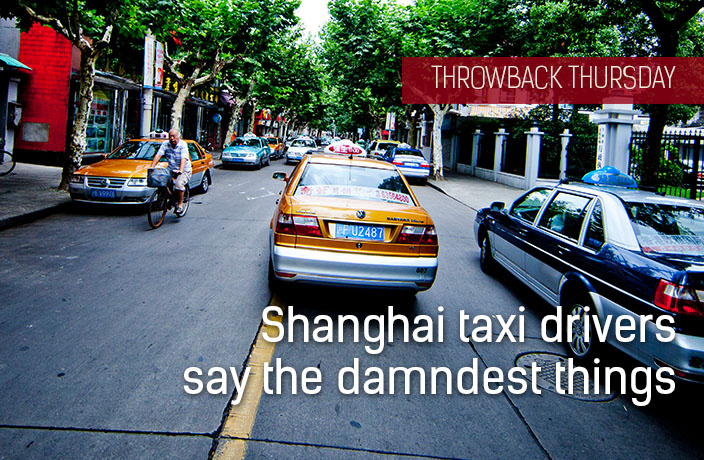 “There are a lot of drunks in Shanghai. It’s really bad when they throw up in the car because of course it smells horrible and we have to go wash it right away. A lot of times we don’t get any money for it. But the worst, the worst is when they fall asleep. Sometimes you can’t even tell they’re drunk when you pick them up. They tell you where they want to go, no problem. But then they fall asleep, and no amount of yelling and pulling will wake them. Even if I manage to drag them out of the car, I can’t just leave them on the street. So, I have to call the police and watch these drunkards sleep until the police turn up. Sometimes the police can’t even wake them up…”

“If you’re looking for a husband, the Shanghai guys are the best the world over. They’re more sensitive and will take care of you. Now those Dongbei men for instance, they’re no good. Their mouth is constantly, extremely smelly. Seriously! They’re always smoking, or eating whole cloves of garlic. Just imagine, lying down next to him in bed and this man breathing on you. No, definitely you should find a Shanghai man to marry.”

“Chinese New Year is the most dangerous time to be a cabbie in Shanghai because all the migrant workers are going back home for the holidays. They need money to get there, and money to give to their families so they can gain face. Every year, there are taxi drivers who get killed by these people. That’s why, during the period leading up to holiday season, I never pick up a group of four men waiting on the side of the road. I just drive on by. Better to lose a bit of money and make it up the next day rather than risk losing it all.” 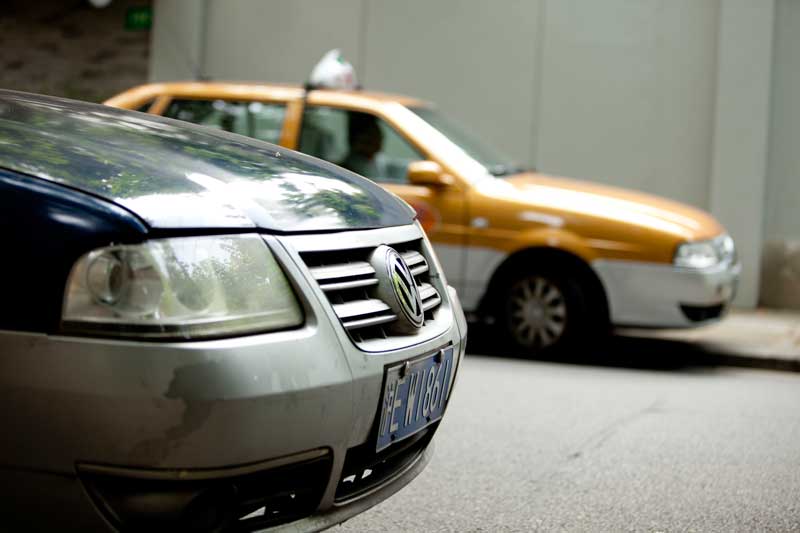 “No conversation seems weird to me anymore. I’m used to hearing about divorces, fighting for assets and money, extra-marital affairs, celebrity gossip and anything else you can imagine.”

“This is how people usually skip out without paying: they pretend to go upstairs to grab their wallet or someone to pay for them. Then they never return, or they give me a fake RMB100 note and ask for real money in return. And then there are the people who just open the door and run for their life!”

“Being yelled at on the job is very normal; it’s usually by the drunk passengers. Sometimes they attack me as well. And of course, some of them will puke or make out in my cab.”

“During one of our recent meetings, we were informed that one of our drivers died in a car accident. It was 5am. He was too tired and his car was hit by a drunk driver. He was only 52. This is the saddest thing about being a taxi driver.”

“I do like this job I guess. It gives me a whole lot of freedom. I can get up whenever I want, and stop work when I feel like it. If I want to make extra money, I work extra hard. If I feel like resting, no problem. I probably have the most freedom of anyone in the city.”

“Kids today, they don’t know anything. They’re spoiled as hell! Anyone born after 1980 is just completely clueless. Sure, they’ve got books and their studies, but they don’t understand anything about anything. We who were born in the ‘60s understand the world better. Sure, they didn’t let us go to school as a kid, we were sent out to the fields. I was one of the lucky ones, I graduated from high school. But I still couldn’t help my kid with his homework and don’t have their so-called ‘culture.’ But I understand things better.”

“Unlike most taxi drivers, I only work eight hours a day, seven days a week. I set my own time and I’m not pressured by the company target. I have two houses that I rent out, so I’m not doing this for the money. For me, it’s a pastime.”

“The government doesn’t care about us. If we were given the same salary and benefits as the public servants, I am sure everyone would beat each other up for the opportunity to be a taxi driver.”

“I hear that when Americans turn 18, they go off on their own and support themselves. That’s really interesting. Our kids don’t know how to do that. My own daughter has been working for a couple years, and she’s making so little money that I still support her. But you know she’s a girl. It’s definitely a necessity to keep her in nice clothes and things.”

“The most important aspect to being a taxi driver is mental acuity. Me, I have a little map in my head at all times.”

“When I was driving the little regular-sized car, I was always incredibly jealous of the big Expo cars. Now that I drive an Expo taxi, I couldn’t be happier. It gives me a better image on the street. It also has a great sound system.”

[All images via Nicky Almasy]

We Talked to The Great Grandson of Shanghai's Baddest Gangster

How China Invented Every Sport EVER

All of them. Ever. Got that?

Some pretty extreme measures have been taken to tackle internet addiction...

Heatwave Alert: Beijing Temperatures Will Spike to 38C on Thursday

Yet another heatwave is expected to smother the capital from Wednesday until Saturday. Things are about to get hot.