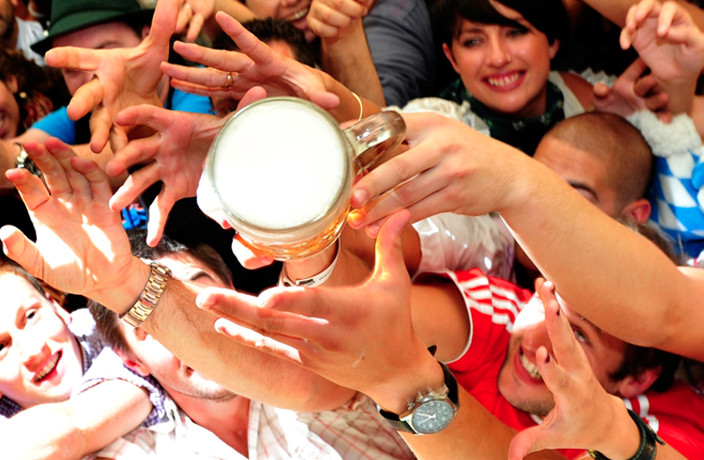 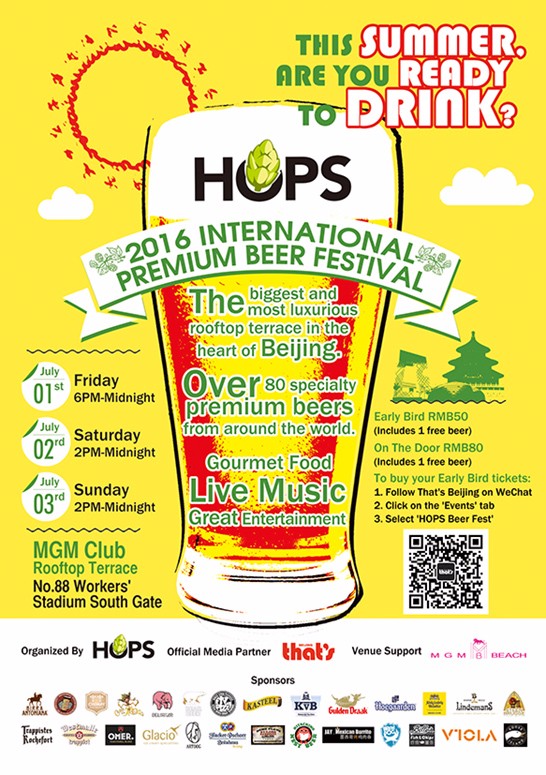 Beijing’s first-ever International Premium Beer Festival is just around the corner. HOPS is hosting the three-day festival, which will be held at the stunning MGM Beach (formerly Uper+) from July 1-3.

There will be a mind-boggling 80 types of premium global beers – from Belgium, Italy, Germany, England and more – to knock back on and enjoy during the event. And, of course, there will also be plenty of mouthwatering international foods on offer to pair with your beers. 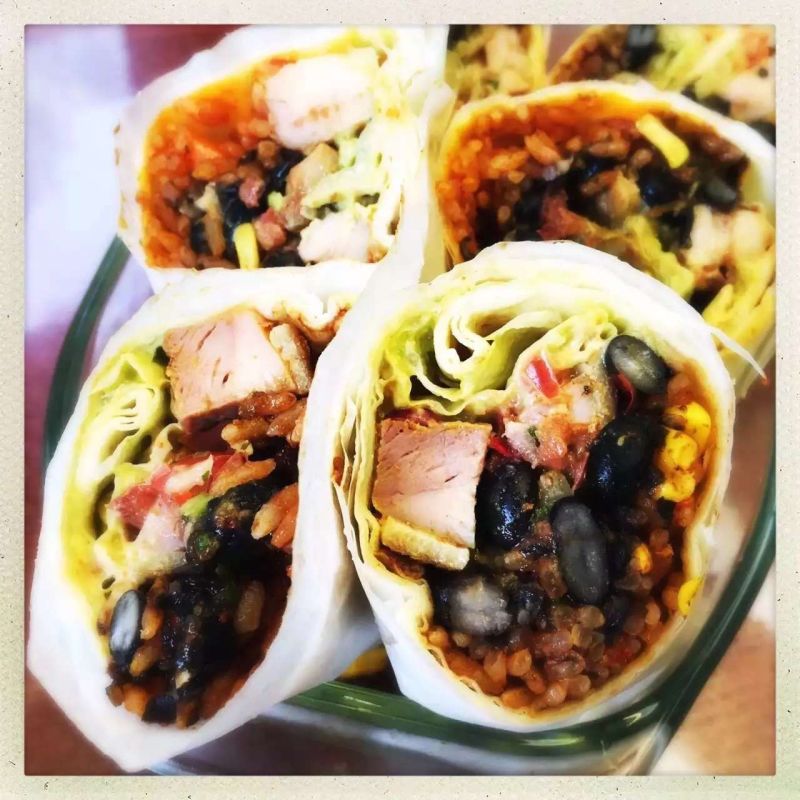 To top it off, some of Beijing’s best musicians, DJs, entertainers and dancers will be scheduled to perform throughout the three-day beer-soaked extravaganza. 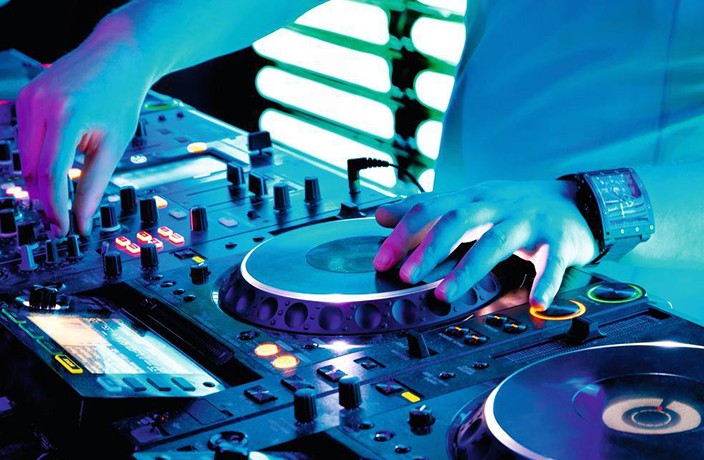 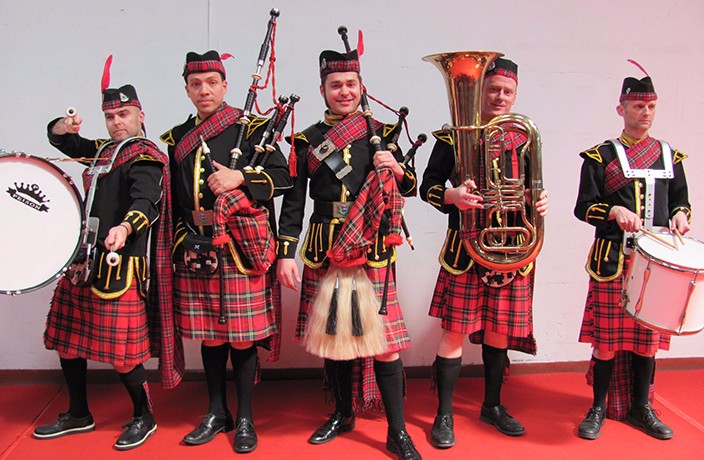 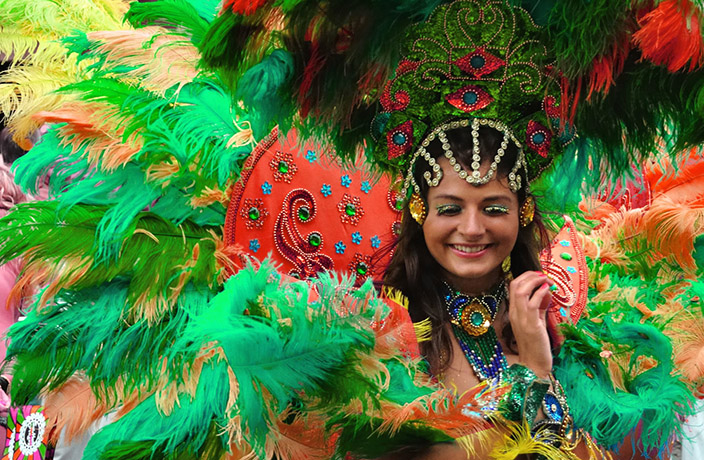 Ever wanted to speak to the minds behind your favourite tipple? On July 2 and 3, select brewers have been invited to give a brand introduction and a Q&A with customers. Alain De Loecker, Official Representative for Westmalle (Belgian); Alexandre Nys, Délégué Commercial Export for Brasserie Dubuisson (Belgian); Axel Gummich, Technical Director & Head Brew Master for König Ludwig (Germany); Didi, Brand Ambassador for Goose Island (America) will all be available on Saturday and Sunday. Anna Gai, China Brand Ambassador for Birrificio Baladin (Italy) will be available early on Saturday.

For all you beer nerds out there the official launch of Hitachino, Japan’s premium craft beer, will also be taking place at the event. You'll be amongst the first people to taste this beer in China and follow it up by meeting the brewery's founder, Mr. Toshi Kiuchi. Oh and don’t forget to try out all the amazing international beers the festival will have on offer, including:

All this plus plenty of other surprises to be found at the festival so come on by to find out what! 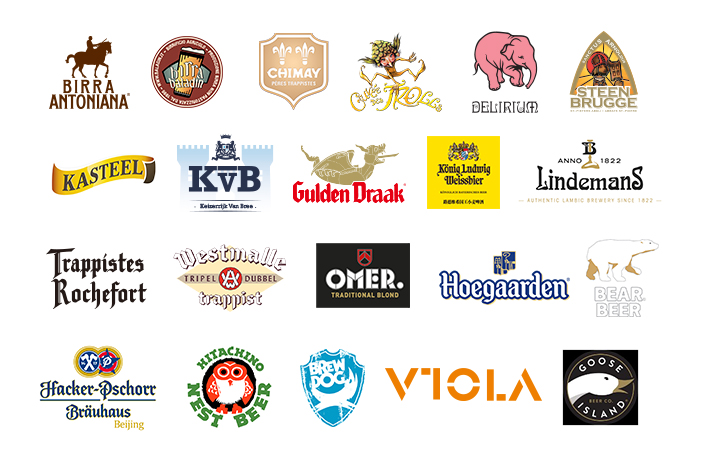 With a food selection as international as their beers, you won’t go hungry at HOPS. Savoury or sweet, mild or spicy, you’re bound to find the perfect pairing for your beer from the vendors below. Jay Mexican Burrito with spiced beers, Fly Pizza with your Italian ale, Homeplate Burgers with your American IPA, Billy’s Fish & Chips with your British brew, Artdog’s Frankfurter with your German Pilsner and Glacio Ice cream with… well, who needs an excuse for ice cream? 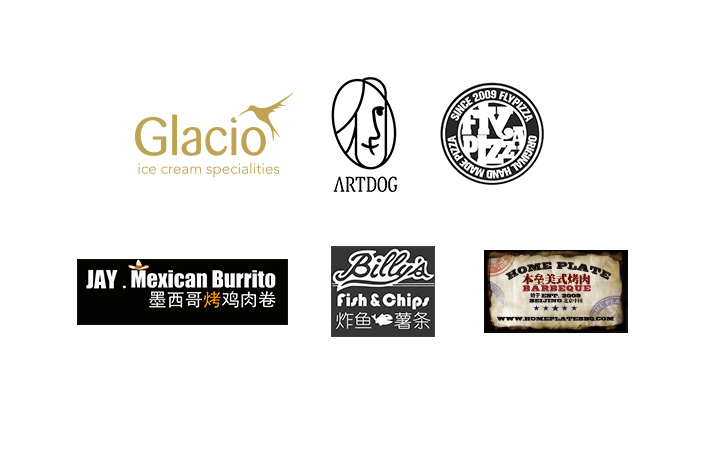 MGM Beach (formerly Uper+) is situated on the rooftop of MGM Club located at the south gate of Workers' Stadium. For the festival all seats and tables will be removed so the terrace can be transformed into one gigantic dance floor. So you can feel free to party the night (or day) away – beers in hand, or course. 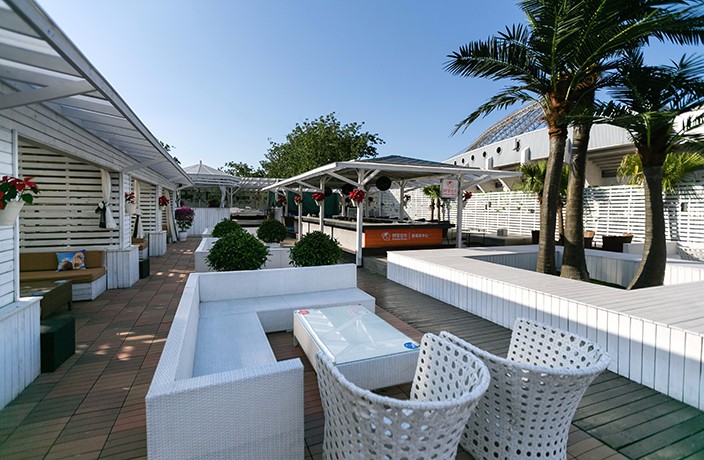 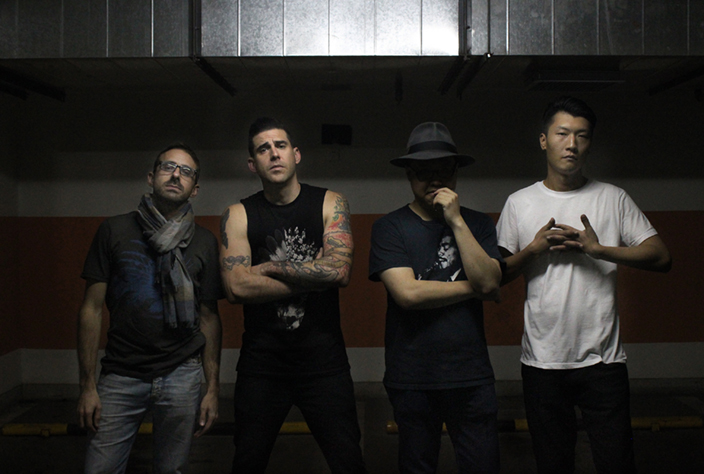 July 1: The Paper Tigers – Get ready to dance with one of Beijing’s best new indie rock bands. 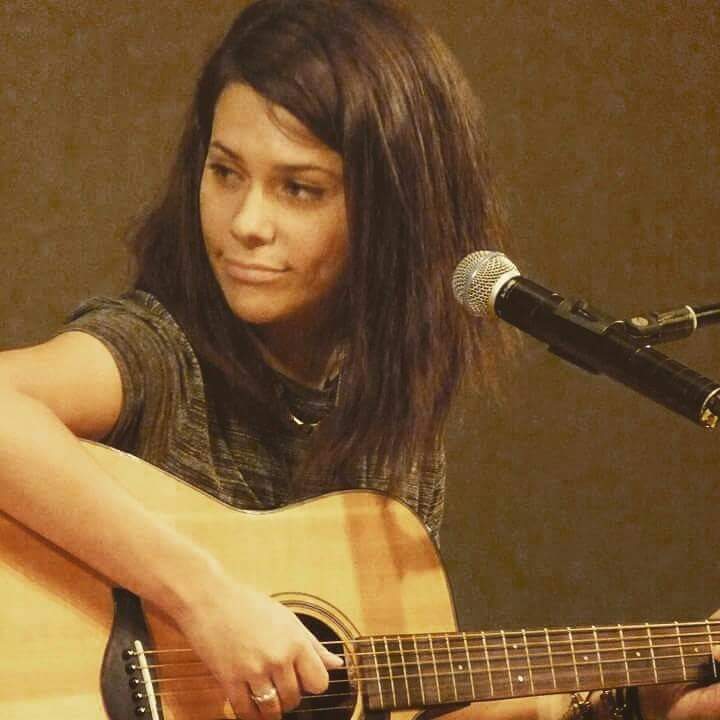 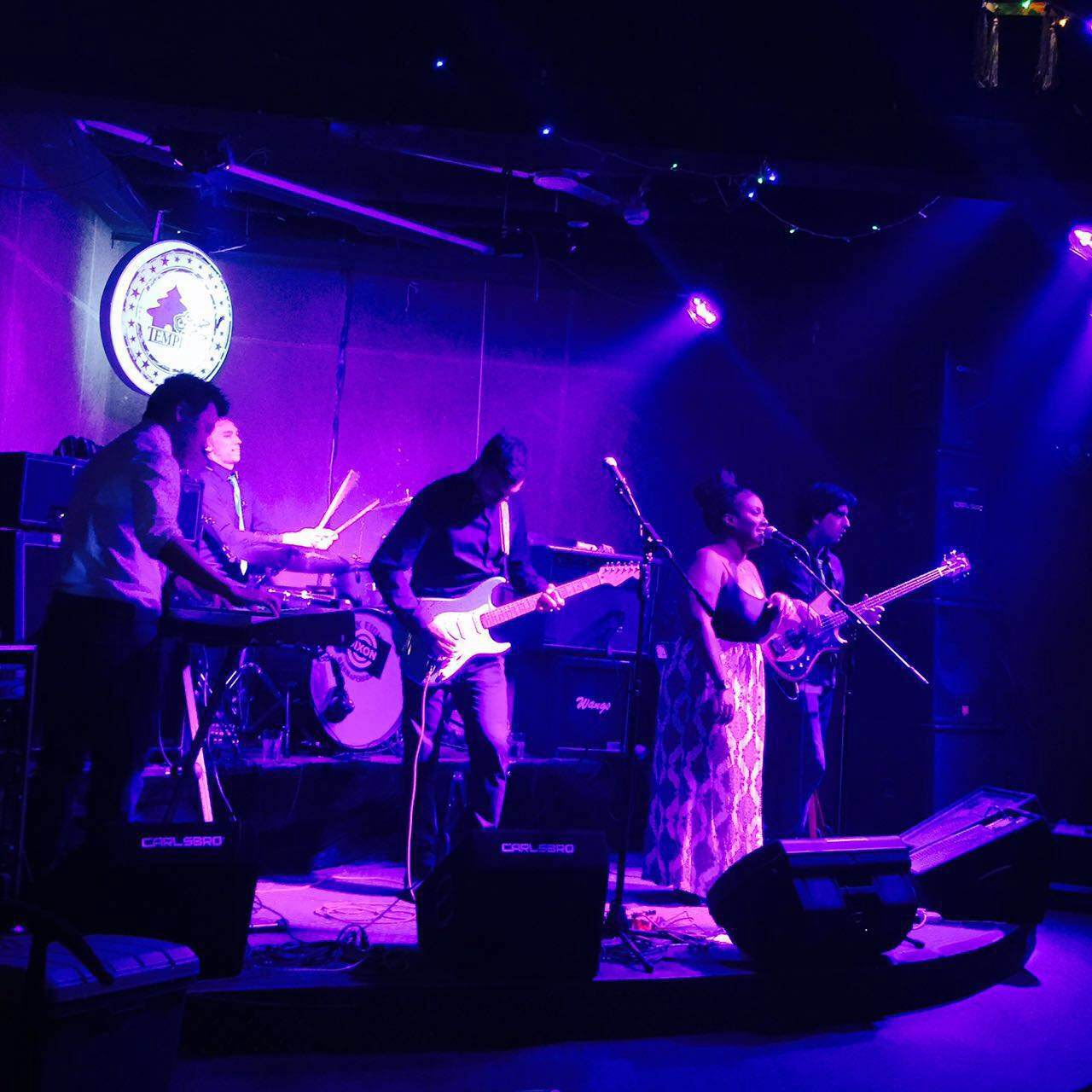 July 2: The Hunters feat. MIRS – One of Beijing's best foreign cover bands will bring their old school funk, soul and rock sounds to MGM on Saturday. July 3: Disaster Chat – One of Beijing's best original bands will be performing their fresh pop sounds and ambient rock melodies on Sunday. July 1-3: There will also be dancing, bagpipe performances and DJs performing all three days of the festival. DJs Gino, Max and Nico will be there to provide the beats. 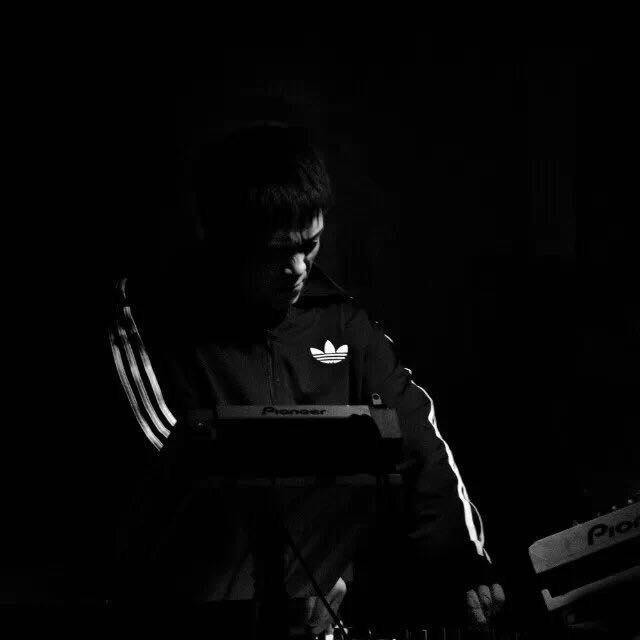 DJ Nico is well-known in the Chinese electronic music world. And he'll be spinning his legendary beats this weekend. 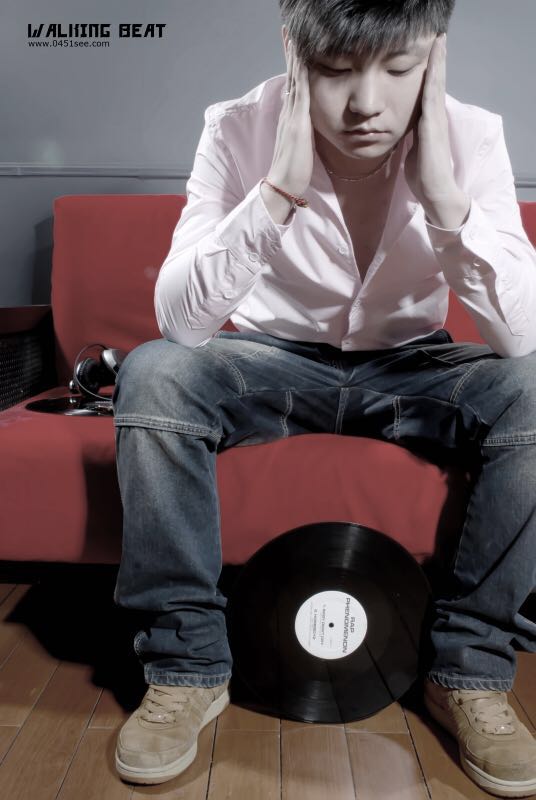 Based in Southern China, DJ Max has been performing around the country since 2004. You never know what he’s going to bring to the table. He style spans lounge, deep house, progressive house, trance and much more. 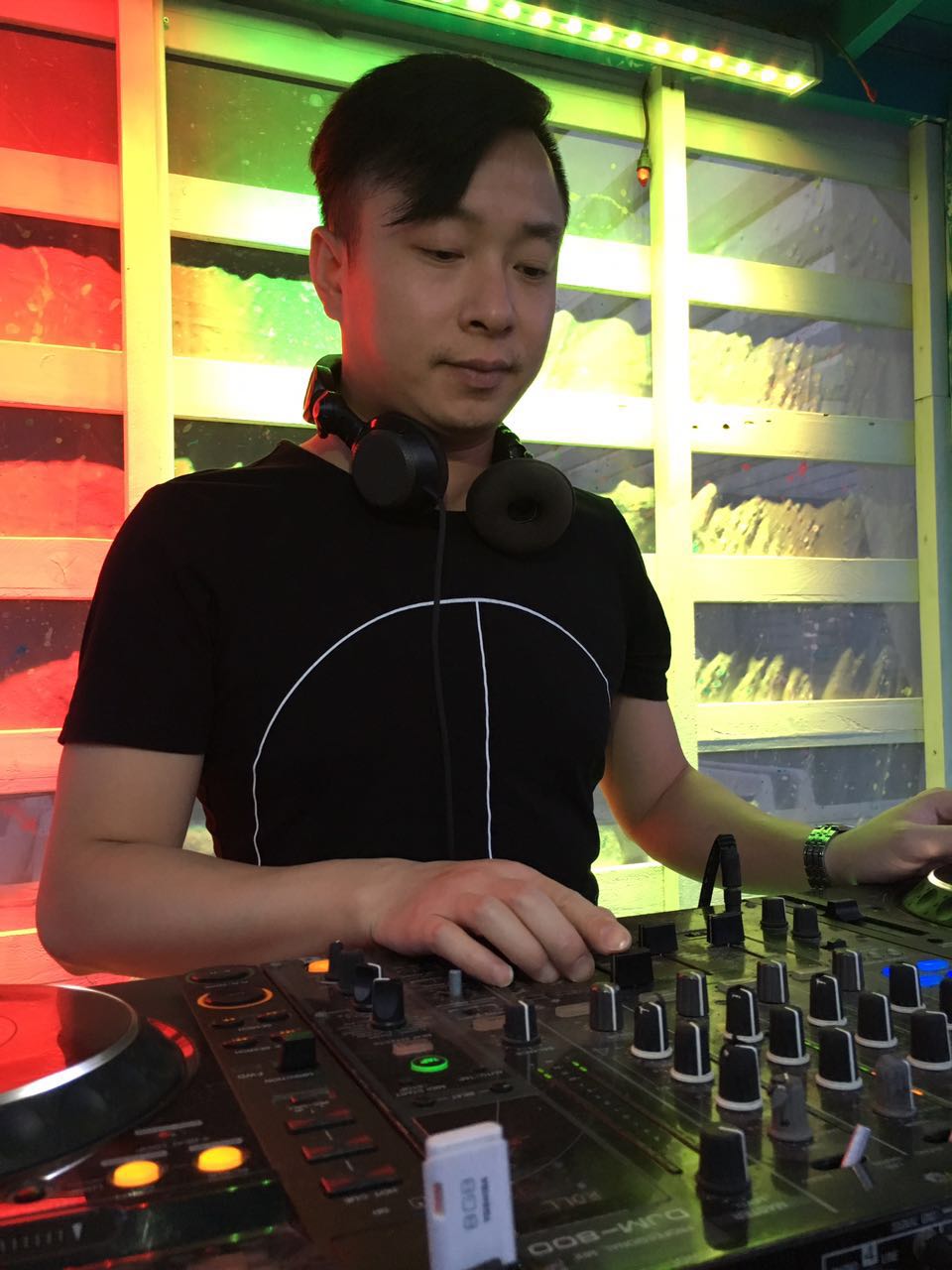 DJ Gino has been in the business for 11 years and has consistently produced quality house, deep house, tech house and funky house with melody.

Have a question about the festival or buying tickets? Message us on WeChat (Thats_Beijing). Alternatively you can call 84477603 or email bjmarketing@urbanatomy.com

HOPS is the only publication in China dedicated exclusively to beer culture. They strive to provide in-depth and accurate coverage of the evolving beer market, including venues and events, the professional market place and the science of beer brewing. Delving into the culinary arts through beer pairing and innovative recipes, they hope to expand their reader's understanding of beer. They will also strive to broaden their reader's knowledge of the history, science and culture surrounding beer, both in China and abroad.

That's Beijing is the official media partner and ticket seller for this event. Make sure you follow us on WeChat (Thats_Beijing) or visit us here at Thatsmags.com/beijing for exclusive updates and giveaways in the run-up to the beer fest. 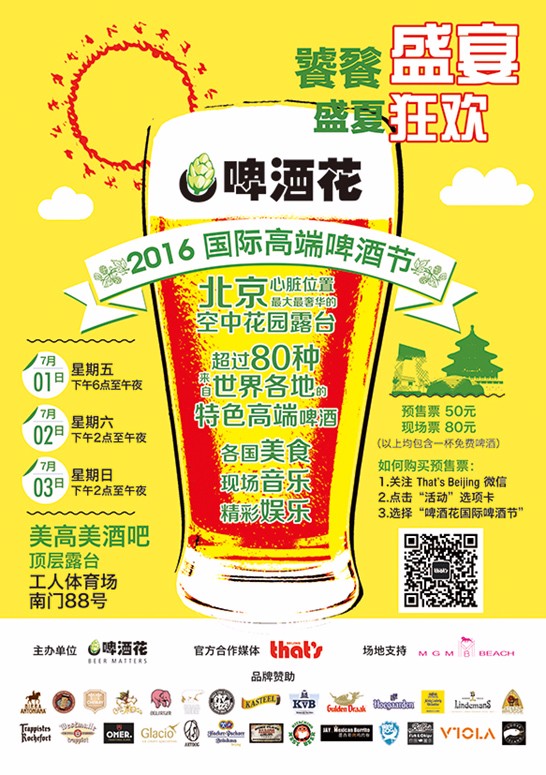 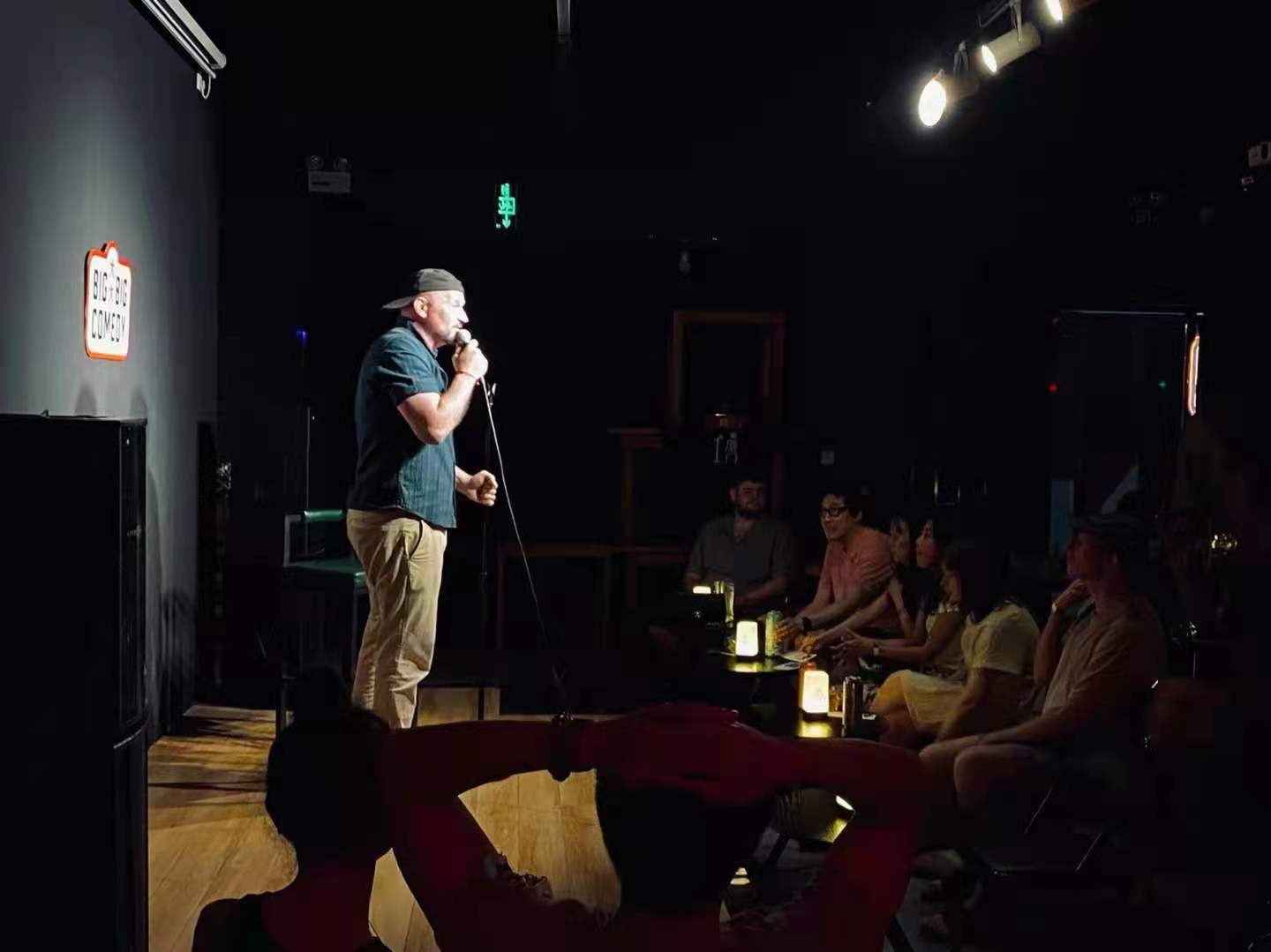 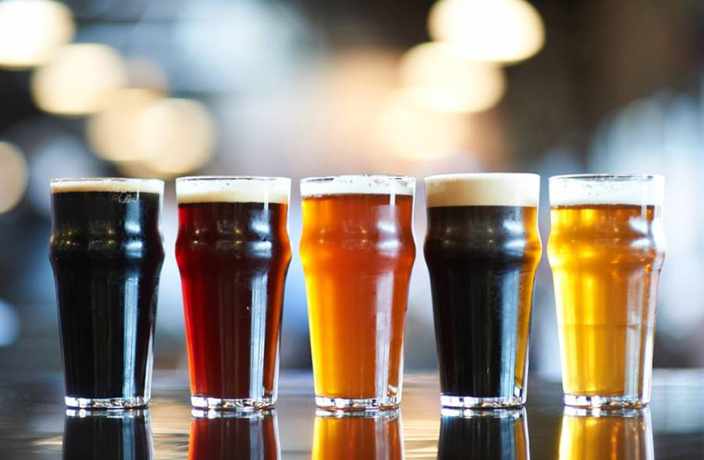