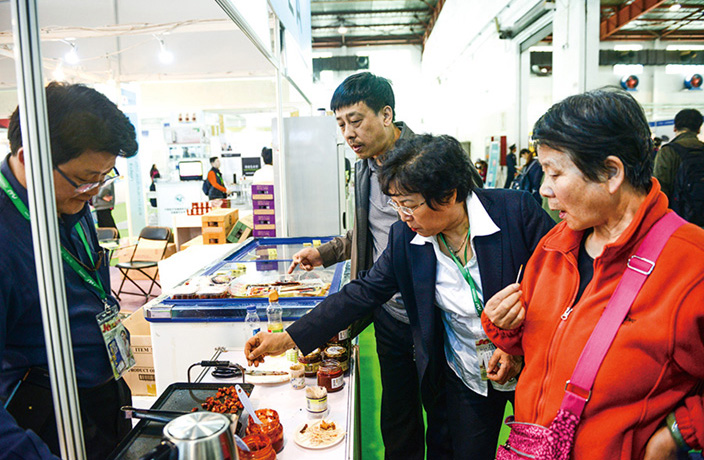 As if they’re here expressly to lend irony to my story, jianbing carts line up outside the entrance to Mainland China’s largest imported food expo. Visitors, their entrance passes dangling from their necks, line up for the local snack; Beijingren fry the eggs and hand them over.

After all, there’s no taste like home. Or maybe there is. I guess I’m about to find out.

I’m at the Asia International Import Food Expo (AIFE), and it’s massive. The fair has commanded crowds so huge that peddlers are hawking entry passes outside its gates. It’s free to get in; they’re just selling them so visitors don’t have to wait in line. This is our first clue that AIFE is a big deal. 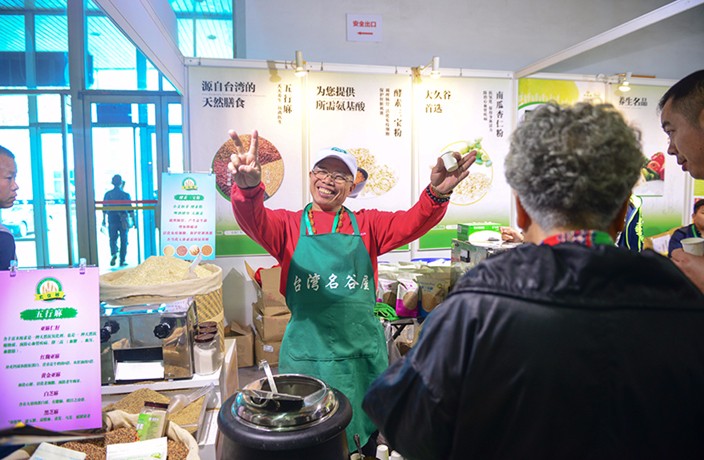 “Our expo is very popular,” International Director Cathy Zhao had told me in her AIFE headquarters a couple weeks before, in what must be the understatement of the year.

Perhaps we shouldn’t be surprised. Food import rates have been rising since China’s reform and opening-up, decades ago. “The total demand for imported food increases by the rate of 15 percent every year,” says Cassidy Liu, program manager for another, competing food-imports expo, CIPFE.

China is no stranger to imported foods. Oreos have been on 7-Eleven shelves for years now. There are more KFCs here in Beijing than there are in actual Kentucky. And Sanlitun has a building full of Spanish food (I’m talking about Nali Patio). But what about countries that aren’t Western? Whose food exports will we see on Chinese supermarket shelves in five or ten years’ time? So I enter AIFE with a question: What’s next?

And, more pressingly: Can I try some free samples? Fortunately for me, and That’s Beijing photographer Holly Li, the answer is yes.

The massive industrial complex that hosts AIFE is full of sights and smells, but most of all, it’s full of people. First up, a shirtless man has us drink a gooey brown liquid. The aforementioned sentence is horrible without context, yet at AIFE, it makes a funny kind of sense. But please, humor me and let me throw in two more disturbing facts before I fully explain this: The dude has a pineapple on his head and he’s wearing a grass skirt.

“Try it!” he says, holding out two tiny cups. (Grass skirts and fluorescent hats are traditional Tahitian dress, if this Tahitian health foods booth is to be believed.) We try it and nod vague approval as the man explains that we’re drinking active enzymes from noni, a Tahitian fruit known for its superpower-like health benefits. In fact, the entire front hall of the expo center is dedicated to products endorsing a distinctly Asian view of health. (Western-style organic juice cleanses, these are not – click here for that.) There are fruits that make your skin look better. There are syrupy Japanese health elixirs. There are stands full of shiny rocks, prompting me to ask a saleswoman what they’re doing here. “It’s traditional medicine,” she says. OK.

There are so many stalls dedicated to health products and superfoods that we wonder if we’re in the wrong place. And the crowd makes us feel especially lost – everyone in attendance looks over 70 years old.

“There are so many grannies here,” remarks my colleague Holly as we pass stand after stand of health products. The median visitor age appears to rise as we travel from Hall 1 (general health products) to Hall 2 (Korean medical supplies), which has me wondering if the expo is capable of warping time like Benjamin Button. “Where are the funeral supplies?” I joke. (I’m the worst.)

But we aren’t in the wrong expo – just the wrong halls. Health foods and Korean medical products (cue the grannies) are merely the first two exhibitions. “We have a theme of health this year,” said Cathy Zhao, back at AIFE offices, in her second colossal understatement of our interview. Zhao explains that the expo’s themes are chosen by popular demand – read: sector growth – but that AIFE also contains halls dedicated to purified water, agricultural products and imported-food miscellany. The average age of the visitors in these sections is significantly lower.

And so we proceed. The rest of the day is a blur of strangers pushing substances and us pushing said substances down our digestive tracts. Things we sample include, but are not limited to: octopus kimchi, sesame paste, Spanish olive oil, Russian barbecue sauce, Turkish candies, Georgian dry wine, Georgian sweet wine, teriyaki chicken, Slovakian wafer cookies, Mongolian spring water, Korean corn wine (it’s a thing!) and some dude’s nostril air filters (to clarify: we don’t eat these; we just learn how to properly shove them up our nose holes).

And Indonesian snack foods. “Indonesia has a really good reputation for instant noodles,” saleswoman Mikka Law tells us, over samples of her brand’s mango juice. Law has traveled from Indonesia to reach out to Chinese buyers at AIFE, particularly Chinese Muslims, because, she explains, “All our food is halal.” Her brand plans to open an office in China soon because, as she says: “It’s a big market.”

“There’s a really big market among upper-class consumers,” says another sales rep, this one for a Russian corn oil company. The upper-middle class consumer is exactly who American fitness-water company BLK is targeting. “The price of imported goods is going down,” says marketing manager Eric Kuang (despite the fact that BLK sells RMB48 bottled waters).

But health food isn’t the only sector experiencing a surge.

“For different times, different decades, there are different products,” says Xing Jiayi of Wendeng Hecheng International Trade Co., a Shandong-based importer of Korean food. His company used to import Japanese products, but it switched gears a few years ago due to popular demand for Korean goods.

“Korean food is a trend, and it’s going to get bigger,” he says. The options on offer at AIFE are dizzying, but perhaps most interestingly, they are decidedly non-Western. There is a distinct lack of Western goods in general – a notable exception being BLK, whose stall includes gorgeous athletes pumping iron to the sounds of gaudy EDM. (It is so obnoxiously American, and I’m allowed to make that joke because I’m obnoxious and American.)

After all, this expo isn’t for the Pepsis and Nestles of the world. AIFE mainly features smaller companies looking to get their starts in China. As varied as their products are, these exhibitors all have certain similarities in common: they come from afar with a desire to break into the Chinese market.

As a Chinese man importing food for foreign communities in Beijing, Max Wang represents the reverse. From his store in Dongzhimen, Wang provides a variety of services for African expats, but one of his most popular is imported foods. The entryway of Wang’s office features a wall of hair extensions in nearly every color (and we mean literally every color – there are some rainbow braids). But to our right, we spy shelves of African food. There is cassava, spices and cans of snack food with colorful labels.

Wang’s services are evidently popular. During our visit, he pauses our interview several times to talk with walk-in customers, who often hug him and greet him by name.

“I get a big shipment in once a month,” he says of his cassava and yams. “It’s very popular. People love it!”

Wang sells more than he can bring in, which is testament to the demand for imported African food in Beijing. Wang’s business currently centers on one office, but he jokes: “I want to turn this whole building into the USA – United States of Africa!”

He’s started to, at least. There’s a salon specializing in African haircuts next door to his office, as well as an African restaurant two floors down. (Although, full disclosure, when we knock on the restaurant door, a woman shouts “NO FOOD” at us and slams the door in our face.)

Will she be serving food to us in the future, though? Maybe.

“With the improvement of China’s economy and the rise of the middle class, more and more people pursue quality and novelty,” says CIPFE’s Liu. “There will be more high-quality and personalized food brought into China, and supermarkets and chain supermarkets will become like miniature imported food fairs. Back at AIFE, we’re having a little pre-lunch aperitif with Georgian wine salesman Mikhail Sharoike. After his requisite spiel on Georgia being the cradle of wine – “Google it, you’ll see I’m right” – we ask him how he goes about importing wine into China.

“It’s simple. We take the goods to China. Then we sell them,” he says, looking at us like we’re a pair of idiots.

“Right, but how do you approach the Chinese market?” I ask. “Do you have a strategy?”

He doesn’t roll his eyes and say “duh,” but it's implied. While not backed up by sales data, his argument is bolstered by queues of visitors lining up to taste the wines. “Hm, this is good,” says one taster, handing over his business card to Sharoike. “Email me later.”

Once again, this is an understatement. 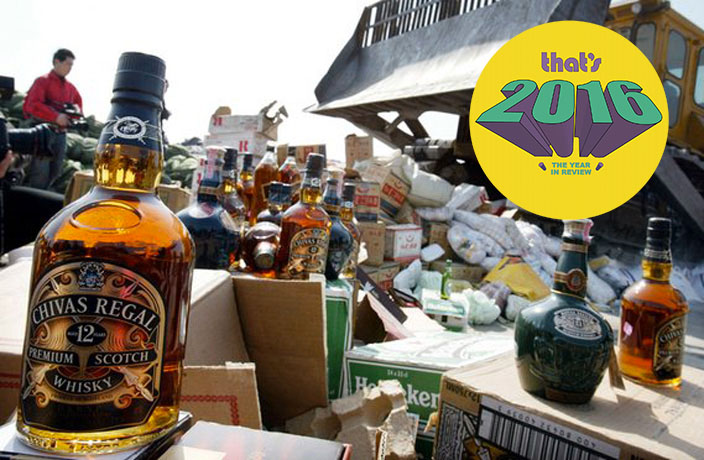