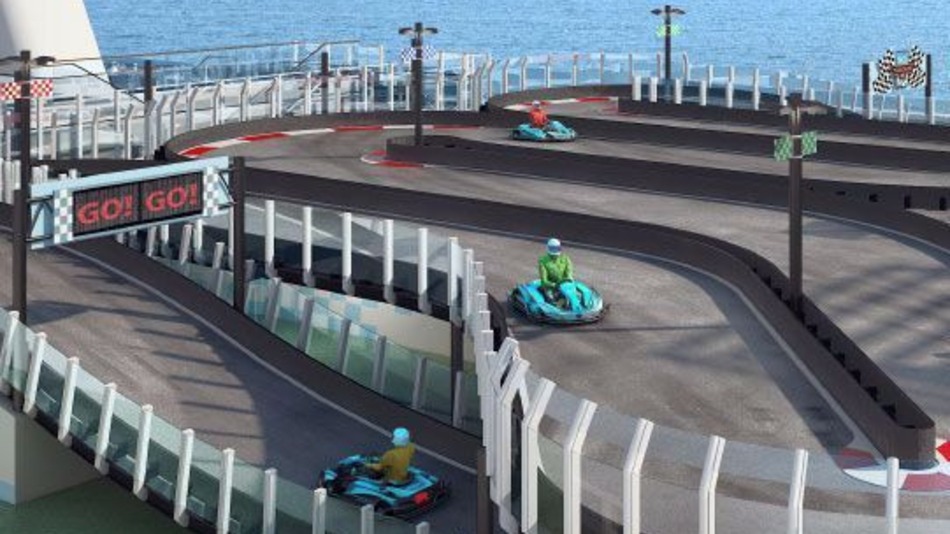 The ship, departing from Shanghai and Beijing (Tianjin), will set sail in summer 2017 for cruises in Asia.

Watch an intro below (VPN on):

Originally titled Norwegian Bliss, the cruise liner was renamed and designed specifically for the Chinese cruise market (while Norweigian Joy translates in Chinese to “Xi Yue Hao,” the translation of ‘bliss’ doesn’t have the same positive meaning). As such, the ship will feature food and experiences particular to Chinese travelers. These include the obligatory ‘Shanghai Noodle Bar’ and KTV, as well as a… racetrack?

According to the ship’s company Norwegian Cruise Line, the two-level racetrack is “the first ever at sea.” Holidaymakers will also be able to ride hovercraft bumper cars in the ship’s ‘Galaxy Pavilion’ level, a self-described “virtual world unlike anything you’ve ever seen.” (Um, does nobody remember The Jetsons?!).

The US$920-million ship will be able to accommodate 4,200 passengers with a total of 2206 cabins. Itineraries and booking information are yet to be announced but with a 2017 sail date, there’s plenty of time yet to save up for what will undoubtedly be an outrageously expensive ticket.

Cost aside, to be able to say you rode a hovercraft or racecar on sea is, arguably, priceless and will probably garner you major chuiniubi status on your next night out.