Tough luck Instagrammers, you're in for a fun few days of fruitlessly trying to connect to VPN servers on your mobile device, thanks to extra tough crackdowns during the run-up to Beijing's forthcoming military parade.

According to Astrill, who issued an alert to iOS users of the popular VPN (Virtual Private Network) app, Internet regulators are "cracking down on IPSec VPNs using the GFW (Great Firewall) auto-learning technique." 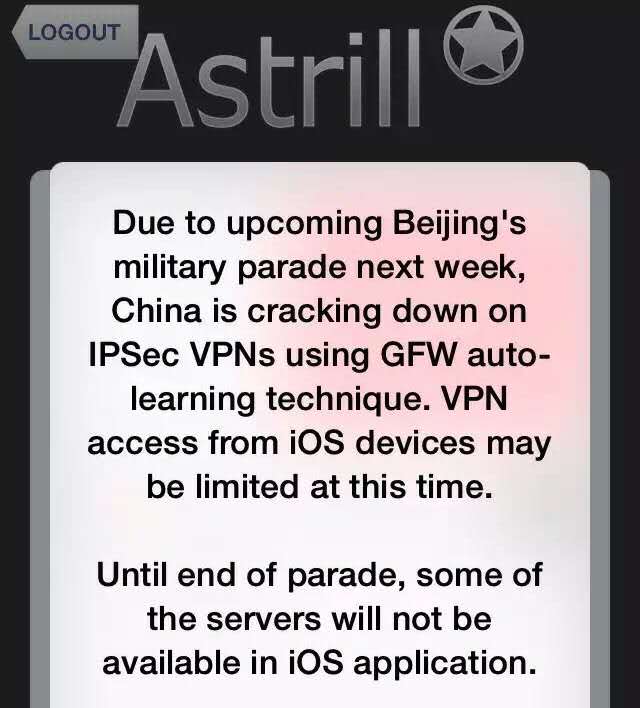 Unfortunately, this outage of service is likely to continue until the parade finishes on September 3. Until then, expect it to be more difficult – at times impossible – to connect to your VPN service if you're an iPhone user. Hopefully, Astrill will continue to work on desktops and Android phones.

According to Astrill, the Cyberspace Administration of China (CAC) use "DPI (deep packet inspection) to detect IP addresses running VPN protocols." It then apparently "takes them a few hours or in best case 1 day to block these IPs," which might explain the need for users of the app and program to switch between servers before finding a successful connection.

Yes, it seems we are being taken back to the dark days of January this year, when China announced an "upgrade for cyberspace sovereignty," and those behind the Great Firewall were forced to use Bing for weeks on end. Behind the Great Firewall: 5 Shows to Watch During the Holiday

Stuck at home for the New Year holiday? Shut off that VPN and delve into the world of China’s video streaming services.

Can the Great Firewall keep Elon Musk’s Internet satellites out of China?

SpaceX’s giant network of satellites might have an easier time bypassing the GFW, so how might Beijing react?

In this video, NMA explains how activists such a GreatFire.org's Charlie Smith have found and exploited a major crack in the Great Firewall: Amazon and Google.