The first full translation of the Christian Bible into Chinese was completed in 1822 - but it would still be another century before anyone produced a Chinese Bible that could be both A) read and B) said.

If that sounds weird (and/or impossible) then brace yourself - because the world of early Chinese Bibles only gets more confusing.

Up until the beginning of the 19th century, there was no concerted effort to produce a Chinese Bible. There were some mentions of Biblical themes found on an ancient Nestorian stele in Xi'an - thought to have been erected in 781 AD - and there probably existed a rough translation of the Hebrew Bible into Mongolian in around the 14th century, but no copies of it have ever been found.

In the 1700s, Catholic missionaries living in China translated various small chunks of the text or, more commonly, wrote Spark Notes-esque summaries of things like the Ten Commandments, Sermon on the Mount or the Biblical life of Jesus.

But these weren't meant to be scriptural translations - they were just Chinese language generalizations of major biblical themes, which could be used to give Chinese audiences a general idea about what this Christianity thing was all about. These texts mostly highlighted the juicy parts, while skimming over the countless "begats" and much of the Old Testament.

Around the turn of the 19th century, though, Protestants began to take Biblical translation seriously - particularly the Church of England, which was expanding its reach throughout India and eyed China as a potential new source of converts.

After several aborted attempts at making a translation, the Macau-born Professor Hovhannes Ghazarian, India-based Dr. Joshua Marshman and China-based missionary Robert Morrison finally achieved success, along with contributions from several other religious and linguistic scholars. The first Chinese translation of the New Testament was printed by the British and Foreign Bible Society in 1813, and the Old Testament and related texts were published in 1822. 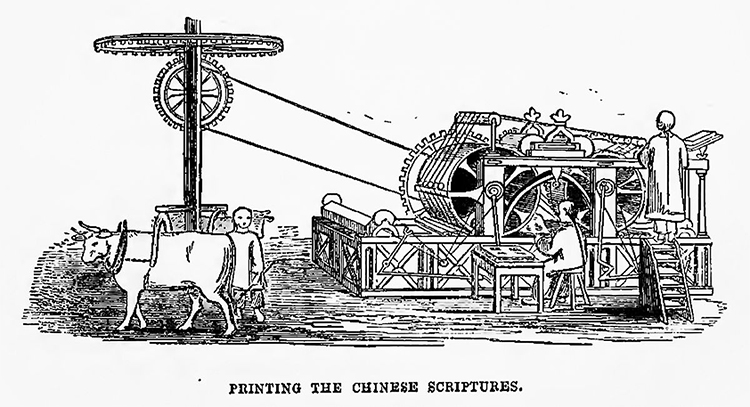 But there were some problems. The text was subject to countless revisions of the ensuing decades, correcting for mistranslations, ambiguous phrases, issues with tenses and all of the other headaches that one may expect would come from such a task.

The most fundamental issue, though, was that the text could not be read aloud. The Bible was written in Classical Chinese - also known as "Literary Chinese" - which was significantly different from the spoken language. Literary Chinese could only be read by China's most educated, and its grammar, pronoun use and syntax is very different from the language's spoken form. In other words, if you wanted to preach from these Bibles, you were out of luck.

Nevertheless, the Classical Chinese versions of the Bible were widely distributed throughout the country. The first were brought in via Canton and Hong Kong, and numerous other translations were completed over the ensuing half century.

A particularly famous translation was completed by Charles Gutzlaff, along with several others, in 1847. Its fame, unfortunately enough, may be better described as infamy - Gutzlaff's version was the one read by Hong Xiuquan, founder of the Taiping Rebellion. Hong received a copy of the text from an Evangelical missionary preaching in Guangzhou, read it, believed he was the younger brother of Jesus Christ, and started a war that eventually resulted in more deaths than World War I.

Hong's Taiping Heavenly Kingdom collapsed in 1864, and Christianity in China returned to the hands of the missionaries. But by now, the inability to preach from Classical Chinese versions of the text had begun to hinder the ability for missionaries to gain converts.

And so, in the latter half of the 1800s, missionaries began churning out dialect versions of the Bible en masse - printed not in Chinese characters, but in various different Romanization schemes. Before, the Bible could be read but not preached - now they could be preached, but not easily read. 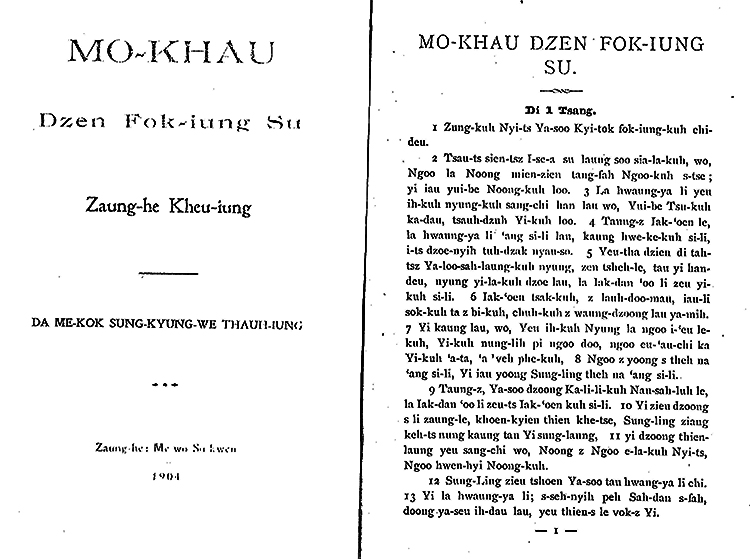 Bible societies throughout China churned out gospels, sermons and scripture in these dialects - each one could be read aloud in one region, but not in another. The Ningbo dialect version was useless in Shanghai, and vice-versa.

There were dozens upon dozens of versions of these mutually-unintelligible, extremely difficult to pronounce Bibles printed throughout the country. 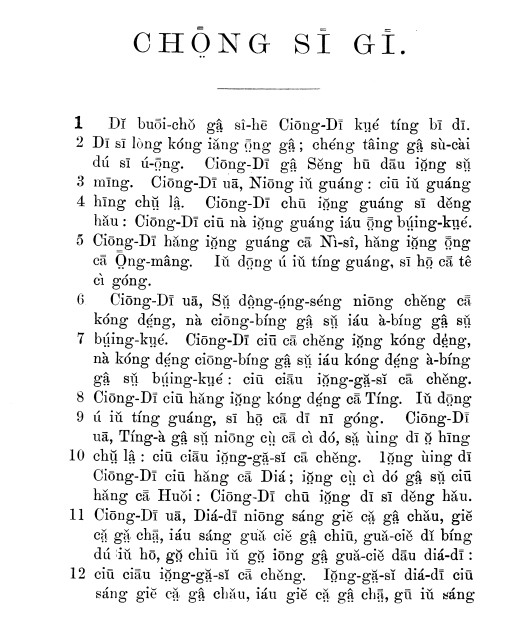 Genesis, published in the Jian'ou dialect of Fujian

By the turn of the 1900s, there was finally a decision to publish the Bible in vernacular Chinese characters - a version that could be read both alone and aloud.

A number of factors contributed to the idea of printing a Modern Chinese Bible. The spread of Protestant Christianity in particular encouraged worshipers to read the text themselves, and Literary Chinese was rapidly falling out of use, even in literature. The fall of the Qing Dynasty in 1912 marked an end of many things in China - a reserved respect for Classical Chinese was one of them. And the ensuing New Culture Movement, which attempted to dispel many elements of old Chinese society that were reviled by the nation's youth, opened up the possibility for Chinese Christian leaders to establish themselves.

By 1919, the first Chinese Union Version Bible was printed, using Vernacular Chinese (i.e. Chinese characters, written with the same grammar as if they were spoke). While it was not the first Bible that attempted the feat, it was the first to be widely accepted among Chinese Christians. It was printed simultaneously in both Classical and Vernacular Chinese, and was based on a revised version of the English King James Version Bible.

The Union Version remains the most popular version of the Bible used among Chinese Christians today. It has been revised throughout the years, to fix mistranslations and also compensate for the Chinese language's significant changes since the dawn of the 20th century - those included everything from changing Traditional to Simplified characters, as well as incorporating modern Chinese punctuation and shifting the sound translations of Biblical names to better align with modern Mandarin pronunciations.

During the 20th century, the Bible was first translated into the dialects found within Tibet, Yunnan and other non-Chinese-based languages. There are also alternate Chinese translations favored by Roman and Russian Orthodox Catholics, various Protestant sects and the text was even put to Chinese braille.

Today, there are countless different versions of the Bible circulating throughout China - nearly all of which can be both read and said.