Over the weekend, many of us saw our Facebook, Twitter and Instagram feeds awash in rainbow colors as people around the world took to social media to celebrate the US Supreme Court’s historic ruling legalizing same-sex marriage in all 50 states.

Social media users in China were also sharing and 赞ing (liking) the news on Weibo, where Chinese netizens were quick to note that in his majority opinion legalizing same-sex marriage, Justice Anthony Kennedy quoted from the Book of Rites: “Confucius taught that marriage lies at the foundation of government.”

In China, progress on LGBTQ rights has been a bit of a mixed bag in recent years, with an official line to "not encourage, not discourage and not promote." But the issue has certainly been gaining greater visibility. Last year, when a British diplomat shared photos of his same-sex wedding on the lawn of the British ambassador’s residence in Beijing on Weibo, the post was forwarded over 30,000 times. And earlier this month, the Mainland’s largest and longest-running Pride festival celebrated its seventh year in Shanghai.

Chinese netizens' reactions on Weibo to the victory for marriage equality in the US have largely been supportive, with many emphasizing the importance of freedom (自由), equality (平等) and progress (进步).

What a huge step forward! Freedom for gays.

Several shared YouTube’s LGBTQ-affirming Proud to Love video, which had been helpfully subtitled, filmed on a phone and uploaded onto the unblocked Chinese Internet using Sina’s video app Miaopai.

“The video is incredibly moving, every kind of love deserves to be respected,” read one post, which was shared 8176 times and liked 7047 times. 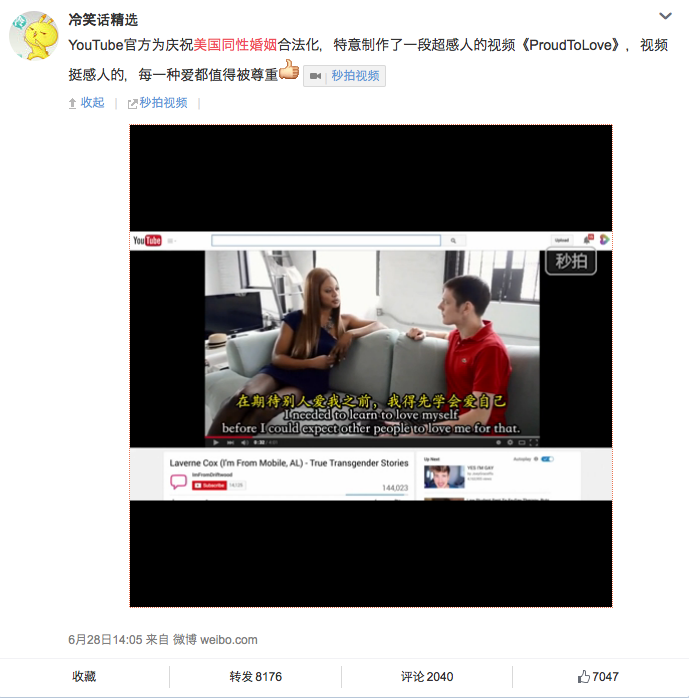 Some brought up issues that are particularly relevant in China, where pressure from parents to marry and have a family lead many gay Chinese to hide their true identities:

Supporting gay marriage isn’t encouraging people to be gay, but is encouraging gay people to stand up and bravely be themselves, and not enter into a sham marriage or marry a girl they don’t love, holding themselves back for a lifetime and destroying two people’s lives.

Others called on their country to join the club of 21 nations that now allow gays to wed.

Commenting on the People’s Daily’s post about the historic ruling, there was also some snark directed at state media:

You don’t accept it; what are you doing posting this?

As well as (what we hope is) sarcasm:

When will the American imperialists legalize bestiality?

But while they were few and far between, dissenting opinions could certainly be found, such as this eloquently expressed and expertly punctuated screed defending the right to be a bigot:

However, in a country that lacks the socially conservative religious fervor of the US, Chinese opponents of same-sex marriage aren’t clutching their pearls and predicting Biblical retribution for desecrating the Constitution with filth and santorum. Instead they mostly worry about a decline in the birthrate, which seems to be a rather misplaced concern for a country that has enacted draconian policies to keep its population down for almost three decades.

It seems like freedom and equality. But it violates natural laws. Unable to reproduce the next generation, the human race will gradually become extinct.

Happily, there was plenty of pushback from saner, more tolerant minds.

People’s freedom includes who they love and who loves them. No one can interfere with someone else’s freedom because you can’t live someone else’s life! I’m really curious about those hysterical people who don’t accept. Have other people eaten your food, drank your water, spent your money? Or is it that someone else finding true love has upset your pathetic life? People who see those who are different as heretical must have terribly narrow lives and mindsets.

Someone even pointed out that if you think the homosexual agenda is a menace to society, the fact that you can say so on the Internet is in no small part thanks to one gay man in particular:

The man who made an enormous contribution to computer science and the father of artificial intelligence, English mathematician Alan Turing, was gay. Without him there would not be today’s computers or the Internet.

Love will find a way. Men in China are being priced out of marriage

Expensive pre-wedding gifts are making it impossible for many Chinese men to get married, China Youth Daily reported on Wednesday.

The 10 best books, according to China's ruling elite

As Isaac Stone Fish at Foreign Policy reports, "This year, the Communist Party's Central Committee took the unprecedented step of issuing a list of the 10 books most popular among the Chinese leadership. Officials chose them from a collection of 111 books that a government think tank had said they -- and, by implication, the country's 1.4 billion people -- should read."