As of yesterday, June 1, Beijing is now home to the strictest smoking ban ever implemented in China. Following the complete failure of preexisting laws, Beijing now bans smoking on public transport, in schools, work places and airports, and even at tourists attractions like the Great Wall.

Read More: We interviewed people in Beijing last month about these upcoming laws

“Under the rules, anyone in China’s capital who violates the bans, which include smoking near schools and hospitals, must pay RMB200,” says The Guardian, which notes the previous fine was just RMB10  and was seldom [read: never] enforced.

This is hardly the first time Beijing has tried to limit smoking. A previous attempt in 2008 aimed to clean up China’s international image during the Beijing Olympics (and was largely shrugged off) and another ban in 2011 was passed by lawmakers but, from the looks of things, nobody decided to tell the public about it.

“Ministry of Health guidelines published in 2011 banned smoking in all public spaces nationwide such as hotels and restaurants,” says BBC News. “The rules were vague, however, and often flouted by Chinese smokers who are accustomed to lighting up at will.” 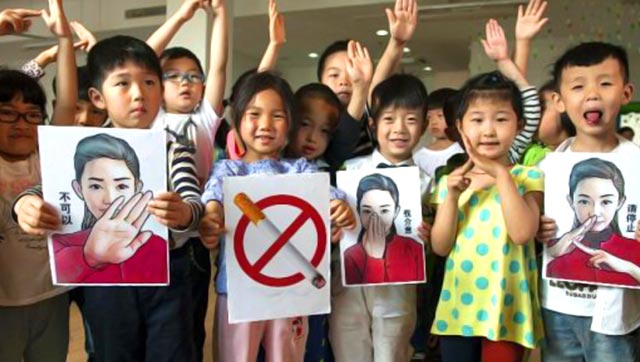 The rules are better-defined this time around, although we’ll see how enforcement plays out. If the increased fines aren't enough to stop smokers from casually lighting up, maybe the public embarrassment will be.

“Anyone breaking the regulations three times will be named and shamed on city government websites,” says the South China Morning Post.

The new law also requires owners and managers of public establishments to be responsible for ensuring their patrons’ compliance. Restaurants can be fined up to RMB10,000 for failing to enforce these new rules.

“Restaurant staff have a duty to try to dissuade people from smoking,” Mao Qunan, of the National Health and Family Planning Commission tells The Guardian. “If they don’t listen […], then law enforcement authorities will file a case against them.”

The Independent reports that 28 percent of the population of China smokes, and the WHO estimates that about 53 percent of men and 2.4 percent of Chinese women regularly smoke.

As if smog weren’t already wreaking enough havoc on China’s lungs. Time will tell if these new smoking laws have a lasting effect, but at least we can say someone in Beijing is trying.