A 70-year-old woman from Heilongjiang Province died on the Great Wall this morning after a woman from Canada ran into her, The Beijing News reports.

Cui Hongfang, from the city of Jiamusi, was reportedly "in good health" before the incident. As she was climbing the stairs at section 20 of the Mutianyu Great Wall at 11:00am, "a foreign woman charged down the stairs quickly, bumping into her" and knocking her down.

"She was walking very quickly," said Cui's friend Mr. Song with whom she was visiting the site. "[Cui] happened to not be holding the railing at the time and was knocked over." 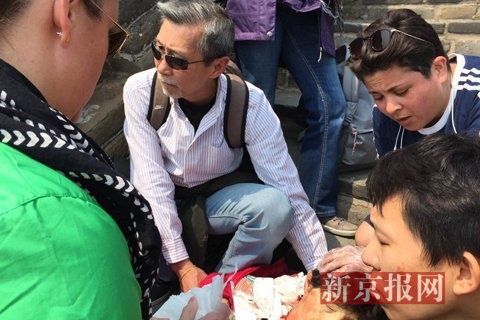 According to Mr. Song, Cui hit her head on a part of the wall and "coughed blood" before she died at the foot of the stairs.

Police from Huairou District have identified the woman responsible as simply a "Canadian citizen." Officers confirmed that the incident did not constitute  a criminal case but suggested that a civil case might be filed.

[Image via The Beijing News] Walking in an (inadvertent) Winter Wonderland. The Forbidden City Palace Museum has denied rumours of an assault, after a video of security men allegedly attacking a tourist went viral, China Daily reports. Chinese President Xi Jinping took a stroll along Nanluoguxiang, one of Beijing's most well known streets, on Tuesday.