In honor of the 50th anniversary of diplomatic relations between France the PRC, French animatronics company La Machine has created a fire-breathing dragon horse.

Longma Jingshen, or "Spirit of the Dragon Horse," is the name of the mecha monster. The terrifying fire-breathing robot is a sign of peace (naturally), with the Chinese characters for "dream," "dragon" and "lion" engraved on its body. Weighing 45 metric tons and towering 12 meters high, Longma landed in Beijing on September 28, and will be in the Olympic Park from October 17 to 19.

But that's not all. 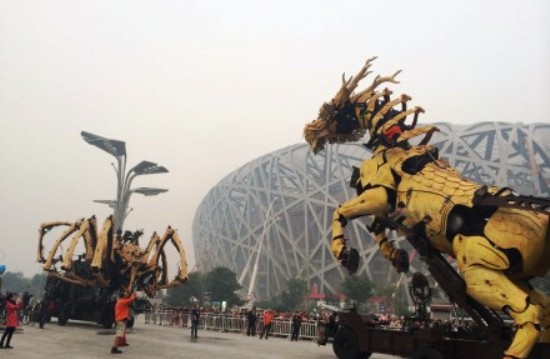 Longma also has a friend.  Just to make things even more exciting, La Machine has created a 5.7-meter-high and six-meter-wide mechanized spider to do battle with Longma.  Unsurprisingly, the spider can spew gallons of water in a single spurt.

Looking at the success of France's gift to the United States, the Statue of Liberty, we can safely predict that Longma will soon become a beloved and world-recognized national symbol for China, no matter how much they grow to love making fun of the French themselves. Moscow-Kazan line will be the first step in 7,000km line connecting Moscow to Beijing.