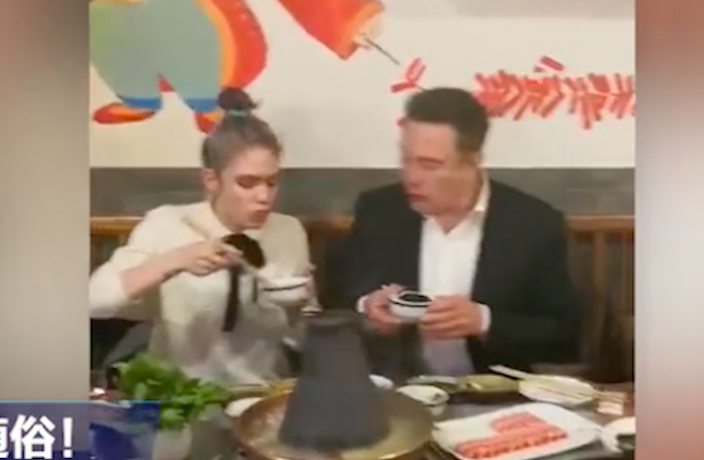 Elon Musk paid a visit to China this week to break ground on Tesla’s first China-based Gigafactory. The mind behind Tesla, SpaceX and Paypal was spotted at a local hot pot shop in Beijing, sampling some Chinese cuisine, according to a tweet by Global Times.

Musk hit headlines last year when he was spotted at a jianbing stall in Shanghai scoffing some delicious traditional street food. This time he swung by a highly-regarded Beijing hot pot shop, Qimen Shuanrou, to grab a bite to eat.

But who is that sitting beside him? None other than pop singer Grimes, with whom Musk shared a brief relationship last year. 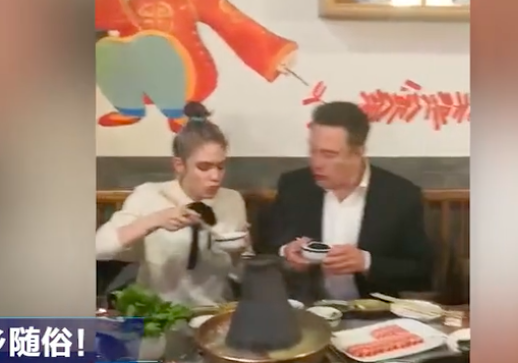 On Monday, January 7, Grimes tweeted about ‘randomly’ landing in China, whilst also asking her followers for recommendations of things to do in Beijing and Shanghai. That same day, January 7, Musk broke ground on Tesla’s new Gigafactory in Shanghai.

The couple reportedly broke up in August of last year, after a Musk tweet about taking Tesla private landed the tech entrepreneur in hot water for trying to manipulate stock prices. The founder and CEO of Tesla was with Grimes and US rapper Azealia Banks when he sent the controversial tweet. Since then, there have been a number of reports alluding to the fact that the pair had broken up.

The day before she tweeted about arriving in China, Grimes retweeted one of Musk’s own posts about his Falcon 9 project, made by his SpaceX company, with the caption “a bridge to the future.”

That’s reached out to Grimes’ representatives for comment but have yet to receive a reply.

Watch the pair as they chow down below (VPN off):