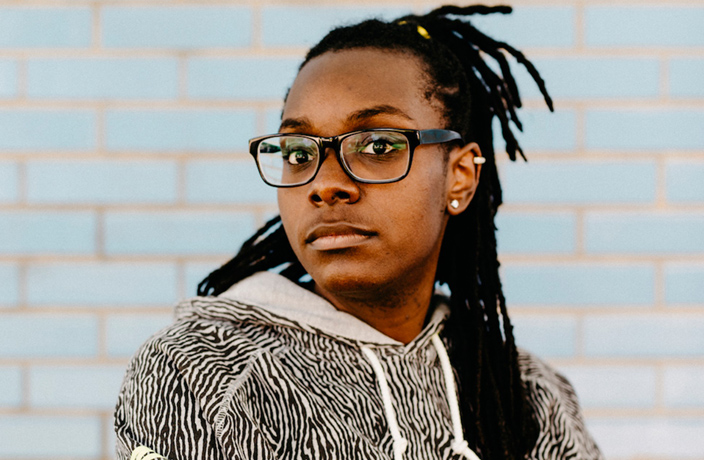 Footwork producer Jerrilynn Patton (aka JLin) grew up just outside Chicago, the genre’s spiritual home. We caught up with her ahead of this month’s set at Dada.

Searching for ‘JLin’ returns a lot of stuff about NBA player Jeremy Lin. How do you feel about that?
We’re always battling for the top of Google. One day he’s above me, another day I’m above him. Honestly, I’d love to do something with him. Maybe we could do a commercial together for Adidas and I could do the music. That would be nice.

A review of your album Dark Energy describes your sound as “frightening.” Did you have any idea you were scaring people?
I think a lot of the times when people don’t understand something, the first thing they categorize it as is fear. If whoever wrote the review felt that way, then who am I to tell them different?

At least it’s creating an emotional response, right?
Yeah, that’s what I’m saying. It’s not how I feel [about my music], but I can’t dictate to someone how they should feel about it. I’m not the imagination destroyer.

You’ve described your forthcoming album Black Origami as being “very far left of footwork” – what’s out there?
I don’t know [laughs]! I’m a very abstract person. A lot of things for me are not concrete. I’m not the person to say ‘you do it like this.’ I hear the basics and develop it, so I can’t say how far ‘left’ or ‘right’ it is.

But wherever it is, you like it there?
Yeah, because it’s my own lane.

You recently quit your job as a steelworker. Are you glad that people will stop asking you about the link between your music and a steel mill?
Yes, it would be nice. I get that every time. They’ll still ask though!

So you’re focusing full-time on music now?I just love music. Some people will say I chose passion over stability but that’s not really the case. Passion is my stability.

JLin will be performing along with dancer, choreographer and founder of the Storm Factory, Avril 'Stormy' Unger.