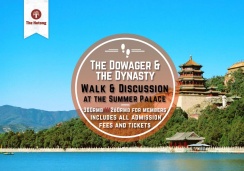 The Empress Dowager Cixi (1835-1908) is one of the most notorious figures in Modern Chinese history. For nearly a half-century, she used her cunning and connections to rule China from behind the throne. Even today, many historians in China blame her for spending too much money building an elaborate pleasure garden at a time when the empire faced grave threats from without and within.

But the real story of the Empress Dowager Cixi -- and the Summer Palace she built -- is more complicated.

As we stroll along the lakeshores and hillsides of her magnificent creation, we will discuss the life and legacy of this fascinating historical figure. We'll consider the reasons behind her scandalous reputation as we look at the final years of the Qing Dynasty, the last empire to rule China.

Map of The Summer Palace

请带我去【The Dowager and the Dynasty: A Walk and Discussion at the Summer Palace】