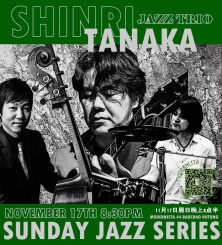 This Sunday, we are visited by Japanese guitarist Shinri Tanaka and his jazz quartet. Accompanying him on stage this evening is Yusuke Ishihara on bass and Takeshi Sakamoto on drums. Set a proper end to the week by listening to their jazz sound.

He learned to play jazz guitar from Koichi Yabori during Kyorin University student. In Tokyo, He started to play Jazz guitar and to create composition.

He was playing gig in Boston and interchange with various musicians. He graduated Berklee college of music in 2002. After returning to Japan, playing jazz in various places with other musicians and bega