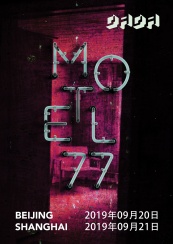 MOTEL77 is the new dark disco / slow techno duo from France revealed by the infamous record label La dame Noir in 2018. Their first EP has received widespread acclaim from Media (BBC 6 Music, Dj mag UK, The Ransom note, Trax magazine…) and has been played around the world by artist like Curses, Local suicide, Psychemagic, Chloe, Zimmer or Marvin & Guy.

In the last year, the duo has performed both in Europe and Asia bringing their dark groove, techno-ish disco, and saturated guitar in Paris, Marseille, Tokyo, Shanghai, Hong Kong or Ho Chi Minh. This time, they're here for a double date in September at DADA Beijing and DADA shanghai with new releases to come out soon