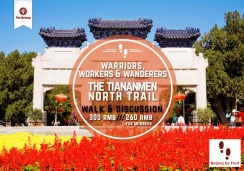 This walk begins near Wangfujing, the longtime commercial heart of Beijing, and then traverses the Imperial Quarter which included the Forbidden City and some of the most important monuments and temples in the old capital.

While this walk doesn’t go into the Forbidden City, we’ll be walking along the palace moat and walls while we visit the old Ancestral Temple, the Altar of Grain and Soil (now a park named for revolutionary leader Sun Yat-sen) before strolling back past Tiananmen and the portrait of Chairman Mao.

We’ll have lots to discuss about China’s recent (and not so recent) history as well as dishing on the Chairman, Sun Yat-sen, and the aptly named Dorgon, the Manchu prince who conquered Beijing in 1644 and helped establish the last dynasty to rule China.