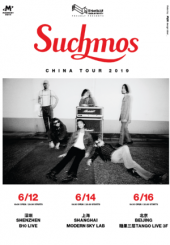 Japanese rock group Suchmos continues their China tour in Beijing this month. Formed in 2013, the sextet is currently touring to promote their latest album Anymal, released in March. Inspired by rock, jazz and hip-hop, the group derived its name from jazz musician Louis Armstrong's nickname, “Satchmo.” The band have graced the covers of various fashion and culture magazines and remain one of the signature Japanese artists speaking for the millennial generation today.