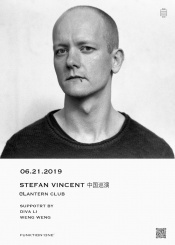 Although growing up with mainly hiphop from guys like Nas and KRS-One, Amsterdam-based Stefan Vincent started to discover styles like jazz, soul and funk while getting older. First encounters with electronic music occurred during childhood throughout somewhat mainstream house, eventually finding its way to progressive and techno. After some years of partying and finding new styles of music, finally the curiosity found a way to the first gentle steps into the creation of electronic music, inspired by Sasha, Carl Craig, Aril Brikha and many others. This eventually resulted in his first release in 2010, which immediately got picked up by John Digweed, Sasha, Nick Warren and many others. Being triggered by the success of the first release, more ep's and remixes on various labels like A Must Have, Proton Particles and Apollo followed, each being received well by the major players. For 2012 a lot more remixes and ep's are scheduled, as well is the further development and execution of his l