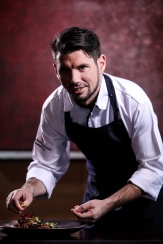 Originally from England, Chef Griffin started his culinary career in 2000 and worked at many culinary institutions around the UK. Chef Griffin joined Shangri-La in 2010, working as head chef of Sydney restaurant Altitude. During his stint in the kitchen, he took the restaurant from one to three “hats” in the Good Food Guide, Australia’s premier restaurant guide.

To quote the chef, “I love using local and seasonal produce to create my dishes, and I’m excited to introduce my style of cuisine to diners in Beijing." Perched high above Beijing on Level 79, Grill 79 boasts an extensive collection of cellared wines and has unparalleled city view’s, all complementing Chef Griffin’s food.