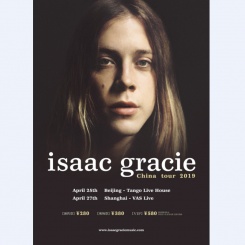 Isaac Gracie might be relatively new to the show biz game, but the British singer and songwriter has been doing his thing for since he was a kid.

Isaac grew up singing in the choir and by the age of 14 he was writing his own songs. He signed with Virgin EMI Records in 2016 and release his first album, which has received all sorts of accolaides, in 2018.

He's melodic and thoughtful sound has been compared to the likes of Elliott Smith, Chris Martin and Jeff Buckley. You can check him out right here in Beijing at Tango on April 25.

Get your tickets here.

April Playlist: The Best Songs From Artists Playing in Beijing