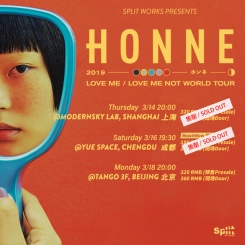 
After a joyous China debut last year, HONNE are back for a three-city China tour! HONNE are the soundtrack to our digital intimacies, our urban love lives in the 21st century. Their smooth electronic-soul a widescreen take on modern heartbreak and timeless heartache.

‘Warm on a Cold Night.’ Good Together’. ‘Day One’. Their smash-hit singles have won them a massive global following, and their debut album was a captivating record that flirted with funk and shone in its quieter moments. They’ve just released an irresistibly infectious sophomore album, and theirs is a blissful, swooning live show perfected over the last half-decade.

Do NOT miss your chance to party to the sweet sensational sonics of this soulful duo. Tickets selling fast.

10 Best Things to Do in Beijing This Week

March Playlist: The Best Songs From Artists Playing in Beijing

请带我去【HONNE Love Me / Love Me Not World Tour】