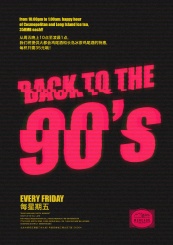 Michael Jackson made history in the Super Bowl; Madonna became much more than just a singer, she became a writer, an actress and a sex symbol; Whitney Huston “I will always love you” and Radiohead “Creep”....And the hip-hop in the 90’s, not to forget!

We love the 90’s and we will honour them every Friday of January 2019, from 10pm until midnight, with non-stop of 90’s more and less popular hits, and we are open to suggestions! Send us your favourite 90’s song to our wechat account (wechat id:migasbj) and get into the weekly raffle of a bottle of sparkling wine!!

One participation per person is allowed so tell your friends and get more possibilities, of winning but also of hearing your favourite 90’s hit at Migas Mercado.

Let’s spice up our Beijing world!

*To make the night even better, from 10pm to 1am: happy hour of Cosmopolitan and Long Island Ice tea, RMB35 each!!