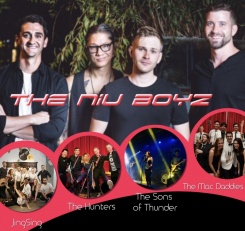 Giving a Beat and Mac Productions present an all-star concert "Notes For Charity" to raise money for orphans with disabilities.

Notes For Charity is the highlight concert of the New Year and will feature a wide array of culturally and musically diverse musicians, all collaborating to raise money and support for disabled orphans in Beijing. Notes For Charity will include some of the best expat bands in Beijing, including The Hunters, The Sons of Thunder, Stevie Mac & the Mac Daddies, and a-cappella group Jing Sing. The headlining performance will be a debut from the newly developed boy band, The Niu Boyz, a mix of well-known singers in Beijing. All bands will perform fun, upbeat cover songs made for dancing!

All proceeds will go to charity. Due to promotion restrictions, the name of the charity cannot be announced, but an organization representative will be present at the event.